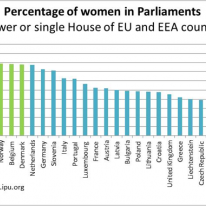 Today’s world is full of challenges for economy, politics and society. Facing up to these challenges requires foresighted leadership, cohesive vision and long-term strategy, all of which should be accompanied by women’s adequate representation in politics. Why is it vital? Higher representation of women in national parliaments and decision-making bodies fosters women’s political and economic empowerment and stimulates gender equality not only in the political sphere but also in the society as a whole including economy, national mentalities and a daily life.

In Europe, as in other countries around the world, women are still under-represented in decision-making assemblies. However, in order to counter this situation many European countries have put in place specific measures to strike the right gender balance in national parliaments.

What image of Europe can we perceive when leaning over available data? Who are the front-runners giving an example to follow? What legal or soft law measures have they introduced?

Inter-Parliamentary Union statistics provide us with a handful of information about women representation in national parliaments in European Union (EU) and European Economic Area (EEA) countries. Looking at the data, we can assuredly state that only few countries are getting closer to 50% of adequate gender balance (marked in the above table in green). If the gender balance was a proportion of 40%—60% of either sex, we would learn that only Sweden and Finland could qualify as countries having appropriate gender balance in Europe. Unfortunately, this result is not very impressive.

However, if we generously lower the bar to 39%, we will discover that much more countries are proud to present gender balanced national parliaments. Iceland, Norway, Denmark, Belgium, and Spain could then complete the front-runners list. Now comes the vital question – how have they done it?

Belgium’s successful performance derives from a quota system introduced in 1999 and modified in 2003. Currently, the Belgian electoral lists have to contain 50% of either sex and within the first three individuals on the electoral list, at least one has to be a woman. Spain also scores high, which again, is a success of a quota system requiring a balanced proportion of women and men on electoral lists.

Arguably, the Nordic states are the leaders within the European countries pointing out their best joint performance in reinforcing gender balance in politics. Historically, the Nordic countries gained a head start by giving women the right to vote before others (Sweden in 1919, Norway in 1913, Iceland and Denmark in 1915, Finland in 1906). These countries have a similarly strong record on the percentage of women in ministerial level positions and are among the top 10 countries in terms of the number of years with a female head of state or government.

What is their golden recipe for success? Do they succeed because they are rich? Or perhaps, they are rich and that makes them succeed?

By rephrasing this question, we can ask ourselves if wealth translates into a highly developed egalitarian culture. Well, research shows that not necessarily. To put it bluntly, there is no reliable relationship between how rich a country is, and how many women are in decision-making bodies. Nevertheless, as percentages of women in Nordic parliaments are high, women also make up a large part of the labour market.

Now let us have a look on the blueprint of Nordic gender-balance story, which can be explained by examining Sweden’s example. The country has the second global (after Rwanda) highest percentage of female parliamentarians in the national parliaments. In 2010 elections, women constituted 45% of the elected candidates. This means that women take 157 deputies of 349 seats in the Swedish Riksdagshuset. However, it has not always been like that in Sweden. Reaching such level of gender balance in politics was a lengthy process. The turning point came in 1972 when the political parties recognised the importance of involving women in politics. Back then, they set the minimum level of women’s representation at 40%. The political parties also introduced quotas. Moreover, women’s participation in political life in Nordic countries is impressive and appears to reflect, at least to some extent, their participation in economic life.

Europe can proudly point out the Nordic states’ accomplishments. Yet, the statistics show that not all European countries can present as flabbergasting results. All over the continent, the increase in the number of women in national parliaments and decision-making bodies is rather slow. Therefore, women continue to be a minority in the political spheres, and political power remains in the hands of men.

There are various strategies handy to foster gender balance in European national parliaments. The quota system can be an effective tool for fast tracking the achievement of gender balance in political institutions. As the Danish example demonstrates, quotas can be at some point abandoned, as no further stimulus is required. However, one must also agree with the opponents of the quota system who criticise it as a top-down approach violating the principle of merit…

What can be done to improve the state of play? First of all, countries must act faster. Sweden has triggered a quota system more than 40 years ago! The golden recipe for Europe to improve the state of play is in hand’s reach but as we know… no pain, no gain. Europe must address gender imbalance in all spheres of public life through promoting positive, non-stereotyped images of women and men in a daily life. EU member states should continue to advance women’s involvement in the electoral process via social campaigns, and eliminate remaining inequalities in political representation by influencing the national parties. Because, as we all know, political parties are the key to success. They are the gatekeepers to gender balance in political decision-making as they master the nominations done ‘in the couloirs’.