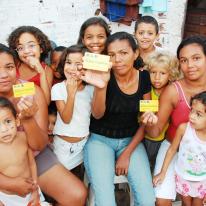 The Brazilian assistance program named “Bolsa Familia”(Family Packet) has been changing the women’s reality in the poorest area of the country.

The Bolsa Familia is a governmental program of direct transfer of income that benefits several families in extremely poverty around the country. In accordance with its structure, the program’s main goals are, to reduce country’s poverty; to give to the grantees the access to basic social rights, such as education, health and social assistance; and the families’ development.

The program structure basically is a payment done every month, by Brazilian government, through a deposit made in the family’s account. The payment amount depends on the family structure; how many components there are and their age; the monthly payment is done, in most of cases, in the name of the woman of the family.

A recent research made by Walquiria Leão Rego (Political Scientist) and her partner Alexandro Pinzani (Philosopher) analyzed the impacts of the Bolsa Familia program in the life of Brazilian women. In accordance to the research the fact of the amount to be direct to women is changing the family’s organization and the women’s participation in it.

During their work, the researchers interviewed several women whose receive the Bolsa Familia in the areas considered extremely poor and the worst assisted in the country: the hinterland northeastern (Alagoas), littoral area of Alagoas, the Jequitinhonha Valley (Minas Gerais), the suburbs of Recife, the hinterland of Piauí, the hinterland of Maranhão and the suburbs of São Luis (Maranhão). In theses areas the majority of the local population is illiterate, the employment rate is high and the government’s actuation is minimum. As the research shows, in the most of theses families the Bolsa Familia payment is the only income received and in some cases it is the first experience of receiving a regular payment. Before that the families lived in the constantly uncertainty about what to eat and even how to live.

In its social history Brazil has a traditional historic of concentration of family’s income in men’s hand. In the areas where the grantees by the Bolsa Familia program are concentrated is strong the resignation culture and the political manipulation. Because of the culture of family band and inferiority, the women’s situation is extremely difficult in such areas. The marital relationship is complex, in most of cases, women suffer with machismo, man alcoholism, domestic violence and social humiliation. Without receive any income and with no social or family support, women are, generally, displeased and unhappy.

According to the research, since the program directs the payment to women, their situation is changing and the libertarian feature of income availability is noticeable in the increase of the self-worth and the management of their own life. Most of the interviewed women told that there were considered change in their material and personal life since the Bolsa Familia started. There were gains in freedom of choice, dignity and respectability in social life.

The women have then, in their own hands, the power of decision about what to do with the money, what is important to buy for them and their family, especially to their children. Even it is a small amount, it presents much for those whom have nothing before. The small quantity has made them a little bit more autonomous, accordingly to the researchers. It gave rise to things forbidden before as vanity for example. One of the interviews told the researchers that she has bought herself her first lipstick in her life. In the women’s words “the program has given them more courage”.

The women now feel freer to decide and talk about her innermost life; to seek for change in their marriage, divorces are more common now; and they feel more confident to make decisions about their own bodies, is increasingly the number of women which seeks contraception methods. Essentially the program enabled to the women have voice in locals, which were, traditionally identified with the women submission. As argued by Walquiria, “the women’s life has changed because their potential of choices has been extended considerably. To exercise the right of choice is a fundamental point to democracy.”

Unfortunately because of the redirection of country’s wealth, made by the program, the Bolsa Familia and its beneficiated is still target of criticism. In the researcher’s opinion it is an example of the historic recurrence of prejudice and stereotyping about the poor. Such criticism is a disregard by the upper-middle to high-class that does not need social assistance.

Despite the negative critics, the research notes that the changing of women’s life promoted by the Bolsa Familia is helping in the construction of women’s identity and subjectivity in poor areas. Although it is just the beginning, and that is still incipient the fact is that something has started to change.  As the researchers analyses, the “ Bolsa Familia” program has enable women became more independent and capable to chose their relation with their family and their society.