Participation of Rural Women in Local Self-Government in India 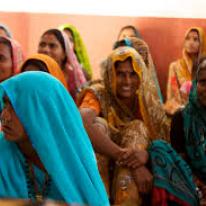 By Gargi Sharma, The 73rd amendment to the Constitution of India in 1992 prescribes rules for elections at the lowest level, the third tier of government called local self-government. The idea behind these provisions is to ensure participation of citizens in decision-making at this level and have financial autonomy at the grassroots level with local body grants and special funds by the state government. The state of Chhattisgarh in central India had the elections for the village level government last week, and the swearing-in ceremony on the 11th of February, 2015. I visited the village of Uparwara, in the capital city of Raipur, to interact with the residents and to know their expections of the newly-elected sarpanch, or the head of the village level government, Mrs. Rambai Sahu.

Uparwara happens to be a small non-descript village, 25 km outside the city centre of Raipur, and would have gone unnoticed till before the setting up of a law university. Since the time the university started here, the villagers and the students have been working closely through minor legal-aid work and after-school tutoring.

The gram panchayat, the village-level local self-government is headed by the Sarpanch (the elected head) and seven to seventeen members (called panch), depending on the population. Again, a third of the seats are reserved for female candidates. Although the observations of one village cannot be used to generalise the fervour everywhere, it gives us an insight into the psyche of the rural people and their expectations from their representatives.

Mrs. Nirmala Sahu, a grandmother, was elected to the post of panch, and in conversation with her, one can see the simplicity of the people of small towns and villages. She told me that the local elections have never seen any foul play, and even though the candidates might be backed by some political party or the other, it doesn’t make much difference once the elections are over and people are back to business. She didn’t spend any money for campaigning and all that was spent was visiting the people and a cup of tea when someone visited her. The popularity of a candidate spreads by word of mouth, and in a village this little your past affiliations and family background go a long way.

It surprised me when I asked people about the winner of the elections, and everyone would tell me her husband’s name. However, this skepticism went away quick since practically everyone I met said that once the panchayat, is seated and set to make a decision, it is just the elected representative who works. The need for her husband is only there for driving her around. The women exercise their right to vote freely and without any influence from their families.

The local government might be one of the few places where the residents put their trust in their representatives and they are consulted not only for pushing their demands to a higher level, but also to solve conflicts in the community. Since all representatives are elected from the locality, people find it easier to trust them than the higher officials. Such a system makes stronger the sense of community in the people and the values of the society are reflected in the decisions taken.

One evening in the village made me realise that despite the fear that female representatives are just seen as their husbands’ puppets, most of the development in the village is owed to its former female representatives. While the residents seem to have quite a bit of issues with regard to infrastructure and development, they seem to resolve them by cooperating with each other. For bigger things, they thank the former local governments for setting up a high school which made it possible for girls of the village to continue their education, assisting the UNICEF Anganwadi center and making it safe for girls of the village to walk outside after dark without being afraid.

This village now has a new head in Mrs. Sahu and they take her as seriously as they would any male leader. Now, they have a few expectations from their representatives and they seem pretty confident that the elected will deliver what is needed. One can wish that this village and every other can meet minimum standards of development and their governments be inclusive for women, with more of them coming to the top.