Is the new man at the United Nations a feminist? 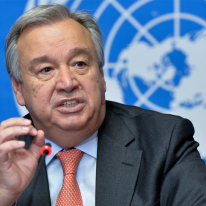 This opinion piece was written by Hibaaq Osman, founder and CEO of Karama, and published by the Huffington Post.

The debates on who would will lead the United Nations ended yesterday like they always do - behind closed doors with a man winning.

The former prime minister of Portugal, António Guterres, emerged on Wednesday as the choice of the Security Council to serve as the ninth UN Secretary-General. Despite months of campaigning and much speculation that the organisation would select its first ever woman leader, it was not to be, and Guterres will commence his five-year term in January next year.

He will take over a UN that has a serious problem with gender equality. The role of Secretary-General is one of many at the UN from which women are routinely excluded. Last year eight out of ten top jobs at the UN went to male candidates. Of the fifteen current members of the Security Council, only one - the United States - has a woman ambassador. The General Assembly recently elected Fiji’s Peter Thomson as its 74th President; only three women have ever served in the role.

Campaigners for gender equality in public life are routinely accused of missing the big picture in favour of identity politics - “shouldn’t it just be the best candidate who gets the job?”, the critics ask. Even ignoring the fact that the “best” candidate rarely gets the top job at the UN - it is competition notorious for political stitch-ups, dirty tricks and secret backroom dealing - questions about merit are almost never raised about male appointments, and in this case it ignores the damaging effect that inequality has on diplomacy.

The UN’s primary function is to maintain international peace and security, resolving global disputes and conflicts peacefully. The evidence shows that peace negotiations that include women are more likely to lead to lasting peace. Putting to one side the issue of injustice, the exclusion and marginalisation of women in diplomacy is damaging for everyone.

We now face the prospect of having to wait until 2026 for the UN’s first woman leader, should Guterres serve a second term as nearly all of his predecessors have.

So what are the challenges that the new leader faces? Having served as the head of the UN’s refugee agency for ten years, Guterres will be familiar with the humanitarian crisis surrounding the wars in Syria and Yemen. He also comes into an organisation whose peacekeeping missions have been accused of carrying out sexual abuse on an enormous scale, and which has failed to properly implement its own resolutions on gender equality.

The failure to broker a peace deal in Syria and the escalation of a conflict that has dragged in regional and international powers must surely be at the top of his agenda. Thanks in large part to the commitment of UN Women and the UN’s special envoy, Staffan de Mistura, the peace talks for Syria have seen unprecedented levels of participation for women. Unfortunately unprecedented in this case simply hints at the terrible record on equality most peace talks have. Just one in five members of the negotiating teams in the Syrian talks have been women, while the landmark Syrian Women’s Advisory Board - the first all-woman body to advise a special envoy - is not formally at the negotiating table at all.

Women’s participation will be a key litmus test for Guterres’ tenure as Secretary-General.

During his campaign, António Guterres described himself as a feminist and discussed how as leader of both the Portuguese socialist party and the UNHCR, he had instituted gender quotas to increase women’s participation, talking of the lessons he learned about institutional resistance to gender equality. For those of us who hoped for a woman leader, this is at least reassuring.

Recognising both the importance of gender equality and the barriers to achieving it are very positive indicators. Guterres has made all the right sounds on equality, but one does not become leader of a political party, a country and finally the United Nations without being a consummate politician with it the ability to tell people what they want to hear. Guterres’ political skills are already apparent - he surprised many observers to win the race when the received wisdom suggested it was the turn of Eastern Europe to supply the Secretary-General.

Many campaigners have spent months and even years calling for the UN to finally break the glass ceiling at the top of the organisation, and there remains momentum behind the campaign for greater gender equality there. We will not simply sit back, the role Secretary-General is just one job, we have always said the UN needs equality at every level. Guterres has said many fine words on increasing women’s participation, if he truly is a feminist he now he must put them into action.