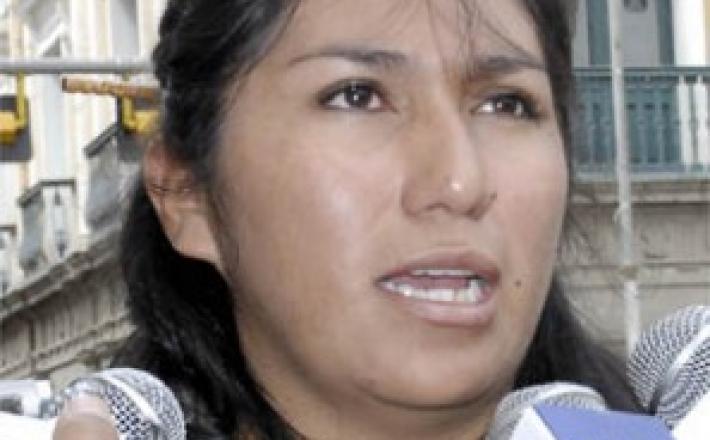 iKNOW Politics: What are, in your opinion, are the three main strategies that have to be applied to the Law against Harassment and Violence against Women in Politics (adopted in May 2012) in order for it to be effectively implemented in Bolivia?

An action or strategy that we intend to put into practice is to work at the media level: we plan to develop a series of campaigns in the media (which incidentally are obliged to publicize this law) so as to guarantee that every corner of the country is informed about this normative framework on the protection of women's political rights.

There is also the ongoing dialogue at various levels with the four organs of power we have: establishing partnerships at the autonomous territorial entities level, another with legislators at national level, at the departmental level, at the municipal level and so on, in order to allow us to engage in a continuous internal reflection between our actions, our advocacy and our work.

In parallel, there is a third strategy that consists of disseminating the law among the authorities themselves. For example, we have been receiving complaints that the judicial branch (perhaps because of its sexist or patriarchal structure) does not understand its application and has, therefore, a hard time enforcing the law. In this sense, the judicial branch has been identified as a specific group on which we must focus our attention.

iKNOW Politics: The entire process leading to the enactment of this law is very complex and it involved many actors. From your position, as a member of the Plurinational Legislative Assembly, could you explain the role of the deputies and senators for this law to get approved?

To start, we changed the name of the original bill from "Law against harassment and political violence for gender reasons" to "Law against harassment and political violence against women". We have developed a strategy, in parallel with social organizations, at a national summit of the 17 women's organizations in July of 2011, in which we discussed this new "for women only" approach to the bill.

The new approach has met with resistance from many of our colleagues within the Assembly. In order to overcome them, President Evo Morales, himself, has made this approach a priority and has given his stance that this legislation is important, because beyond him there may have been political will to include and work with women but in other spaces this was not well reflected. By being aware of this, his participation and political stance have been very important to smooth the road for implementation.

The contribution of statistical data and concrete testimonies of women has also helped, and unfortunately, also the reality of the matter, given that a year ago a woman councilor was murdered. This reality has helped parliamentarians understand and gauge the problem faced by women in all areas where intimidation, persecution and all kinds of pressure were materializing at high risk.

Finally, there has also been a strategic alliance with civil society: first we talked with women's organizations, then with private NGOs that have helped us in the push for approval of this legislation and in monitoring its implementation. It’s also worth mentioning, in particular, the commitment of the Association of Women Councilors and Mayors of Bolivia (ACOBOL), which has been crucial, since the time of its formation as an organization of women politicians, in recording the various ways in which they have suffered while exercising their political function in different public spaces, and these records have been very helpful to us.

Few male legislators have appropriated this fight, but we need, nevertheless, to recognize the organic and internal discipline of the majority bloc, which has facilitated the approval of this legislation. To understand the attitude of the bloc, we need to remember President Evo Morales’ attitude, who has played a very important role, so much so that the MPs who opposed the law did not actually vote against it, but merely left the parliament chamber at the time of the vote so that their opposition would not be recorded.

iKNOW Politics: As president of the Union of Women Parliamentarians of Bolivia (UMPABOL) what are the objectives it has set to strengthen this area?

We are 266 women (including alternates) between the two chambers (Chamber of Deputies and the Senate), belonging to this group. We take in all female legislators without exception.

We must now plan internal debates between women with different approaches and specialties that can strengthen our experience. After this we will try to impact on other areas. More specifically, we face the challenge of building an alliance between authorities at different levels, designated and elected.

Women elected can be assembly members of the Plunational Legislative Assembly, parliament members or municipal councilors. In all these "deliberative bodies" there are women present, and we need an alliance between them in order to start generating new positions of leadership so that they can "jump" from the municipal to the departmental, and from the departmental to the national level; that is one of the strategies. Secondly, we need to develop an internal strengthening at the national assembly level in order to identify and consolidate its management; planting these seeds so that later they can grow at the public level.

iKNOW Politics: What methods of political funding have you found to be more effective in your political career?

My political career started with a self-funded campaign: it took a big effort and ‘door to door’ work that came down to, or rather, expanded on the concept of non-"cronyism" politics. While within my term as an elected legislator, financing came in very different forms; it had to do with generating inter-institutional partnerships, as achieved with international organizations, specifically the cooperation agencies that have received the most direct funding (it’s complicated, however, with UNWomen because it still has its resources concentrated in the management of one NGO). Concretely, the awareness campaign we have started and that will last five months has been achieved through a partnership with at least eight international institutions.

iKNOW Politics: According to your experience, what recommendations could lead to a better balance between men and women on the issue of political funding for campaigns?

In some parties, like the one I represent, funding is self-generated, and the contributions of the militants are distributed equally and fairly, so I think that political parties or political organizations must provide their own resources and conduct their campaigns in that fashion, as we do. Our electoral system provides electoral campaign with funds administered directly by the state agency.