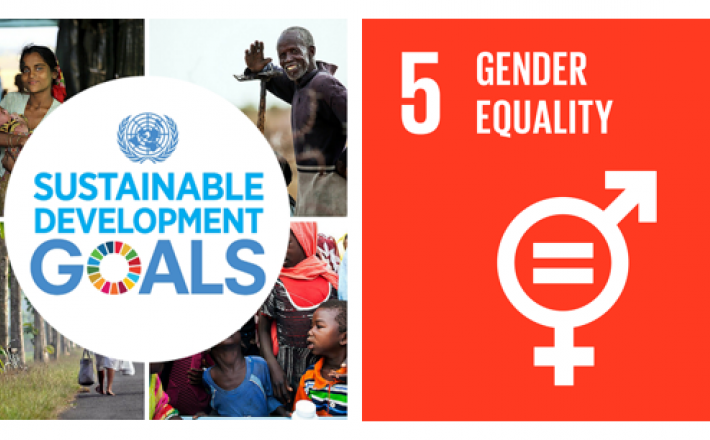 In September 2015, 193 Member States of the United Nations unanimously adopted a new global agenda to end poverty by 2030 and pursue a sustainable future for all. The 2030 Agenda for Sustainable Development (SDGs) includes a specific goal to achieve gender equality, which aims to end discrimination and violence against women and girls and ensure equal participation and opportunities in all spheres of life.

Advancing women’s political participation is crucial for delivering on the SDGs. That is why one of the Targets for Goal 5 is to  “Ensure women’s full and effective participation and equal opportunities for leadership at all levels of decision-making in political, economic and public life” (SDG Target 5.5).

This online discussion aims to consult various stakeholders about their experiences of using the Agenda as roadmap and instrument to ensure that women's political participation is maximized, at global, national and local levels. It will run from 09 January to 12 February 2017 and will be moderated on this page. International organisations, civil society organisations, government representatives and academia are invited to contribute with their expertise and experiences, and answer to one or more of the below outlined questions.  Contributions highlighting innovative partnerships and accountability mechanisms established to deliver on Target 5.5. are encouraged. The iKNOW Politics team and partners are looking forward to an informative knowledge-sharing exercise on this topic.

Please note that there are different options to send your contributions:

There are 8 Comments in this language version, More comments are available in different languages.

This is a very good platform for us to share our work on women in politics. In Uganda we have case studies which are working well of course with some challenges but noticeable achievements are there. The Ugandan Parliament passed the Public Finance Act which has a provision for a gender equity certificate which is issued to ministries and sectors that show compliance to gender in their budgets before they are passed by parliament. Every year budgets are scrutinized for their compliance to this requirement.

So far this is working out well but there is a challenge of inadequate capacity of the members of parliament to analyze these budgets from a gender perspective. UN women however has supported partners to work with MPs on developing tools for analysis and also building their capacity.

On monitoring gender sensitive legislation the Uganda Women Parliamentary Association (UWOPA) with support from different development partners is involved in constituency out reaches to monitor how the legislation are working out and also sensitizing communities on these laws. This has also worked out well and many times measures have been put in place to address the gaps.

Lastly as a country I would say there is political will to promote gender equality although we still have gender bills that have stagnated for so long.

Equal opportunity for leadership roles does not imply that women should be handed roles they are unqualified for, but rather it seems to acknowledge the need for an equal playing field in leadership opportunities. Equality for political opportunities include the ability for women to participate politically and removing the barriers to their political participation. Gender equality issues are interconnected with other development issues,for example, other sub-goals further qualify this goal and many of them are connected to one another.

b) Elimination all forms of violence against all women and girls in the public and private spheres, including trafficking and sexual and other types of exploitation

c) Elimination of all harmful practices, like early and forced marriage and female genital mutilation

d) Recognizing and valuing unpaid care and domestic work through the provision of public services, infrastructure and social protection policies and the promotion of shared responsibility within the household and the family as nationally appropriate

Some feminists argue that the patriarchal structures within politics needs to be abolished for complete liberation, that the structure of the systems is unequal because it was founded by men on principles that preserve power and privilege structures. Others argue that the solution to political gender equality lies in reserving half of the seats in political office for women. What is clear is that all the work women are doing in community organizing and networking for women's rights needs more women in parliament. Women lobby groups might push a bill to be debated in parliament but without women's numbers to veto such bills,they are voted down by the majority (men) who might not feel strongly on women's agendas.
Female politicians are more likely to concentrate on issues that matter more to women such as daycare, gender equality, reproductive rights,work/life flexiblity, elderly care, children’s welfare. There are some issues that are more important to women and affect them more. It also seems like common sense that women would be more likely to focus on these issues than men.

SDG 5 - what does it mean for women and girls across the world?

The landmark adoption of the Sustainable Development Goals (SDGs) in September 2015 attests to the increasing global consensus that achieving gender equality and empowering all women and girls (SDG 5) is intrinsic to the holistic development of participatory and representative democracy of each country and the world at large. The SDGs articulation of a specific goal to achieve gender equality and empower all women and girls builds upon the Millennium Development Goals and comprehensive frameworks such as the Convention on the Elimination of all forms of Discrimination Against Women (CEDAW 1979) and the Beijing Declaration and Platform of Action (1985).

Globally, it is evident that there is no shortage of internationally agreed upon instruments, national laws and declarations on gender equality goals, yet gender inequalities still persist in all countries. While some progress has been made towards increasing women’s and girls’ equality in education, employment and political representation over the last two decades many gaps remain, particularly in the areas that were not addressed in the MDGs. When it comes to political representation only one in five members of parliament are women.

Hence, SDG 5 and its targets set out the requisite collective action to create conducive environments towards substantive equality for all women and girls. In order to take on the challenge of translating SDG 5 into reality for women and girls across the world, it is fundamental to address the key areas of gender inequality, such as gender-based discrimination in law and in practice, violence against women and girls and women’s unequal participation and representation in private and public decision-making.

For instance in order to attain the SDG 5 target of ensuring women’s full and effective participation and equal opportunities for leadership, measures are needed to challenge the persistent gender inequalities inside political parties and society in general. Implementing gender-responsive measures within political parties’ constitutions, internal rules and regulations on processes to identify, nominate and select candidates for leadership positions are essential to achieve the SDG 5 targets.

The issue is not whether women are able to take an active role in development and democracy building, but rather how women’s participation can be translated into critical influence and decision making in democracy building processes. It is equally important to uncover how women perform visible and instrumental roles in democracy building such as through their membership in political parties and as voters in elections, yet their participation is not matched with their representation and involvement in political leadership and decision making at all levels.

Ultimately, it is critical to ensure that the gains made at the global level, through frameworks such as the SDGs, are institutionalized at national and local levels and translate into transformative changes in women and girls’ status and position in society. Drawing from the global experiences and momentum that informed the articulation of SDG 5, the different capacities of women, men, national governments, international agencies, the media, social and political movements and gender equality advocates must be harnessed to achieve the set targets.

the full participation of

In my opinion i see that the

In my opinion i see that the developmment of women political participation process must be integrated within the sustainable development goals of the UN . there should be untraditional actions that should be done towards that issue , as the quota is not sufficient as it not a condition that it gurantees an effective women participation . i suggest that seminars and awaness campaigns should be launched especially in localties and rural areas in the developing nations to increase the awarness of women about the importance of their role in different aspects of life , and also workshops should be made to train women how to act poliically and have political expertise that qualify them to participate effectively in the political life.

For many years, people are

For many years, people are talking about how to ensure women’s participation in the political life equally to men without implementing effective methodology to ensure that. The problem behind that is the wrong methodology. Some people suggest that the civil society is responsible to spread awareness in rural areas where people are less likely to give women and girls their rights. However, this method would not be effective unless you have a suitable portion of women in the parliament to initiate laws and regulations that mandate the respect of women rights and ensure their full participation in all sectors of the political system. In addition, if the country does not have sufficient number of women in the executive branch to force and implement these laws, no one would care to ensure the implementation. As a result, the effective methodology to ensure women participation equally is a close chain that consists of a parliament, executive branch, civil society and a monitoring entity to ensure that all parties accomplish their duty such as the IGOs or the the international and national NGOs.

It is interesting to hear about the United Nations plan for the new SDGs. Specially, I think it is important how Deputy Executive Director of UN Women, Lakshmi Puri, reiterated how these are meant to achieve (not just promote) gender equality and women’s empowerment (https://www.youtube.com/watch?v=ZGNsldobnR4&index=6&list=PLBu9R9C-zSzHrK...). To successfully implement Target 5.5, there needs to be progress in the adoption of more legal or voluntary quota systems. As talked about in Runyan and Peterson, quotas “are among the most statistically significant predictors of increased women’s representation and tend to be contagious.” It seems like quotas are an effective way of increasing women’s participation at all levels of politics.