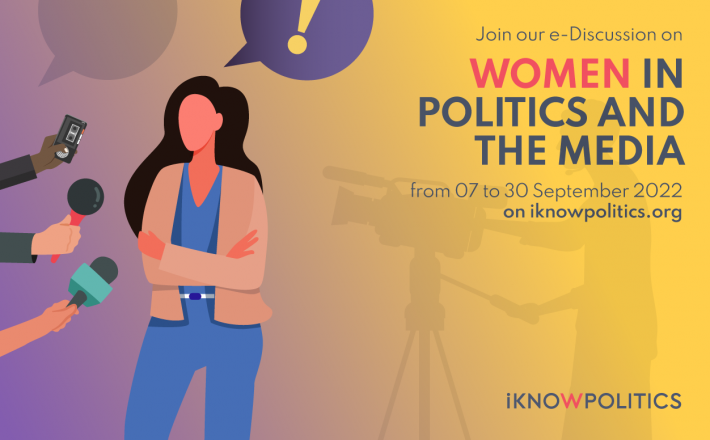 Susan B. Anthony was familiar with the press’ ways. Journalists relentlessly ridiculed the women’s suffrage movement.[1] Fast forward to more than a century later, women in public life still face biased, sexist, and discriminatory media treatment. Research over the past few decades reveals that women in politics continue to be at a disadvantage when it comes to media coverage.

When reporters cover women in politics, they often use terms that emphasize women's traditional roles and focus on their appearance. They perpetuate stereotypes of women politicians as weak, indecisive, and emotional. They sometimes even hold women politicians accountable for their children’s or husbands’ actions, though they rarely hold men politicians to the same standards.[2]

A study by the Inter-parliamentary Union on violence against women parliamentarians reports that the media can perpetuate rumors and misogynistic behavior. The study’s survey revealed that 27.3% of the participating women MPs said that traditional media had shared highly contemptuous or sexually charged images or comments about them. The percentage rose to 41.8% when they were asked about photos or comments disseminated through social media.

Globally, women in politics, particularly women of color, experience overwhelming levels of abuse and gendered disinformation campaigns, which traditional and social media often fuel and perpetuate. With the purpose of discrediting, delegitimizing, and silencing women in politics, studies have shown that women are often discouraged and dissuaded from getting involved in politics because of gendered media reporting.

Indeed, sexist media coverage contributes to the under-representation of women in politics.[3] A worldwide study found that while women’s position has generally progressed, it is slower in media representation and politics. Further, it concluded that the more there is sexism in the media, the less women candidates there are.[4] The media has a powerful influence on voters and gender differences in media coverage can have real electoral consequences. Not only can it dissuade women from engaging in politics, but it also discourages political parties and political elites from selecting women as candidates.[5]

This e-Discussion seeks to raise awareness and collect experiences and knowledge on gender differences in political media coverage, its impact on women’s political participation and representation, as well as gather good practices and recommendations on ways to counter the negative impact of media portrayals of women in politics with fair and unbiased coverage.

Journalists, producers and editors, media monitoring institutions, electoral management bodies, women and men in politics, political party leaders and members, civil society and women’s rights activists, practitioners, and researchers are invited to join this e-Discussion from 07 to 30 September 2022 by answering the below questions. The submissions will contribute to a report that will augment the knowledge base available on the topic.

1. Are women politicians less visible or covered differently than men in political news coverage in your country? Please share data, if available
While there is no available statistically verified data for how women in politics are covered in Uganda, there is evidence daily that women politicians attract media attention differently. This week the media has found fodder in Uganda 'exposing' the disagreement between The Speaker of Parliament- a female and The Prime Minister - also a female over their perspectives on whether nyege-nyege, a public even should be allowed to go on or not. The core of the public debate is on the morality of the event. The debate in the public realm is based on the argument that the nyege nyege event promotes immorality and should be banned, and this is the idea espoused by the Speaker and other MPs. On the other hand, the Prime Minister thinks that the even promotes Tourism and was convinced by the organisers to allow the event to go on. The morality versus immorality debate descended from the focus on the event, to the individual characteristics and personalities of the two women and they have been attacked and ridiculed on social media over this matter. The male supporters of either sides of the debate are not being attacked in the same way. In this way, we can see that the media is still very petty and focuses on stereotypes of gender when it comes to discussing issues of public interest such as this. Uganda Media Women's Association did a research on Ugandan women politicians after the 2016 elections and found that such stereotypes of women were many. May women candidates were judged more as women first, than as public, political leaders.
2.What can lawmakers, governments, and civil society do to ensure media outlets/journalists deliver fair and balanced media coverage of women and men in public life?
There is need to sensitise journalists to be conscious of the effects of their gender stereotypical representations, words, attitude and perspectives on the public. The public also needs to be constantly reminded of the negative effects of gender stereotyping and how it sniffles women's ability to discuss matters of public importance. This is because, the more women are ridiculed, the more they withdraw from public debate and the marginalisation of views that promote equality go on.
3.With sexist traditional media coverage disseminated on social media, women in politics are exposed to vicious online attacks and abuse by often anonymous perpetrators. What can social media companies, media outlets, governments, lawmakers, and other decision-makers do to put an end to the crisis of online violence against women in politics?
media companies should sensitive their journalists especially the news editors to be gender aware so that negative stereotypes are not allowed on radio, newspapers and Television. Governments nd law makers should make laws and enforce punishments for those who are known to perpetually ridicule and marginalise women on media. While laws that protect women's and men's rights to freedom of expression exist in Uganda, there is limited enforcement of the laws when they are violated. If Police can be empowered o cause arrests and the courts of laws can punish such offenders, then people will begin to see such violations as bad and punishable. Otherwise for now, people think on-line violence is flimsy and worth ignoring and yet the emotional toll it has on victims is enormous.
In a recent study we did with Women of Uganda Network (WOUGNET), we found that Online Gender Based Vilence (OGBV) tends to be normalised and taken as 'light' and yet some victims are really adversely affected. Some women politicians lost in elections because they spoke up when they were violated. A case in point is Hon. Rwabogo who was violated by a young male stalker. Not only was her case dismissed by the courts of law. In the public court of political voting, she was made to lose elections and one of the reasons flaunted by the public was that, she took young man to court over a flimsy issue. Talk of the vicim being victimised. Rwabogo lost in the elections.

1. In Pakistan there is no discrimination regarding visibility in the media if a woman acquires the status that generally belong to male politicians. For example, Maryam Nawaz, Vice President of Pakistan MuslimLeague N gets the same amount of time and attention as Imran Khan, Chairman, Pakistan Tehrik Insaf. The challenge is in raising women to that high position in the party or the government where she is involved in decision making.
2. Amendments should be made in the political parties Act to bind the Parties to give equal status to women and ensure that more women reach decision making positions.