Liberian Representative and Chair of the Women Legislative Caucus 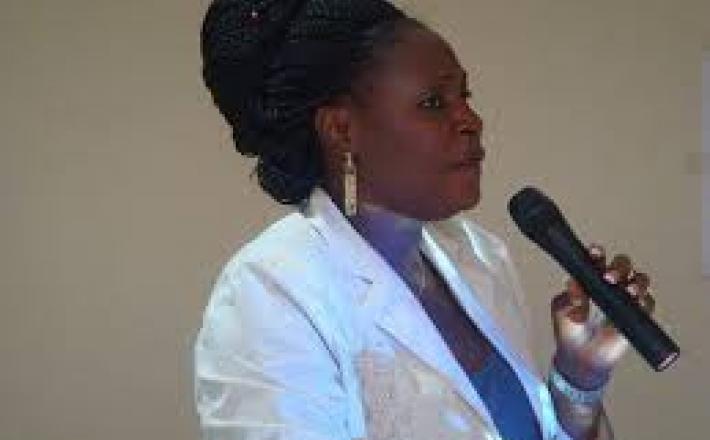 “I was a typical African woman who was raised to believe that politics is for men, and I refused to run. But in the end, I did it for my party, because I thought it would be unfair to stay out of politics. So I accepted and decided to run.” - Alomiza Ennos-Barr

iKNOW Politics: You are chairing the first Legislative Women’s Caucus in Liberia. Is this the first time Liberia has had a significant number of women in Parliament? Why did you decide to form a caucus? Were you influenced by similar experiences in other African countries?

This government is historic because it is the first time that Liberia has such a number of women in Parliament. We have nine women in the lower house (out of 64) and five (out of 30) in the upper house. So there are 14 of us. Most of the women are new in politics and are learning. This is the first time we have formed a caucus, and our membership is non-partisan. We belong to different political parties.

Once we are in a Caucus, we need to have a mission and goals. We have been inspired by the experience of Rwanda, which is a wonderful effort by female legislators in Africa. We are working to increase our influence in Parliament and society, so we are trying to build on the experiences of other countries. We are young in terms of proposals and institutionalization in politics.

iKNOW Politics: Can you tell our readers how you became interested in politics after such a violent period in your country’s history?

Ambassador George Weah, a leader of the Congress of Democratic Change, asked me to join them. So I am a member for the Congress of Democratic Change, and that is how I got into politics. I mainly work in the Women’s League. When election time came, the Gender Minister and the UN encouraged women to register. Initially, the parties did not meet the 30 percent requirement for including women. So they had to go back to the drawing board and ask women to run.

That is when I was asked to represent my party. I was a typical African woman who was raised to believe that politics is for men, and I refused to run. But in the end, I did it for my party, because I thought it would be unfair to stay out of politics. So I accepted and decided to run. For me, as for most women candidates, the main problem is that we are not used to being in politics or in power. We must look for resources, including money. The Gender Ministry and UNIFEM offered special training programs to build our skills. For most of the women candidates, this was our first time in politics.

We did not know how to campaign, we did not know how to express ourselves; we did not even know how to develop a platform. I had to speak to many groups. I represent one of the biggest constituencies in the country. I had to speak with people from different backgrounds and ethnic groups, with different levels of education. The Gender Ministry offered to help us develop the ability to run for election. The process started in August 2005, and the election was in October. It was not easy, to go door to door. What a campaign! I had to go from public speaking to talking with elderly people who couldn’t attend rallies. I drew on the resources that the Gender Ministry training gave me.

iKNOW Politics: What was the political situation like at the time? Did your family, friends and party colleagues support you? Did you encounter many obstacles?

My party colleagues supported me, but I also got support from other political parties. When I campaigned, I knew some people couldn’t accept me because of my political affiliation. So I forgot about my political affiliation and thought, “I am a woman and I am running for office. I want to make a difference. If I am weak, many things we would like to do for women will not get done.” So I said, “Forget about my party, forget my party affiliation, forget everything about me and look at me as a woman who wants to make a difference for our children.” That won me a lot of votes and support from other political parties. That is why we encourage women to enter politics, to build their skills, here and in other countries.

iKNOW Politics: Can you tell our readers about policy changes or legislative proposals on gender issues that you plan to work on during your term?

First, we want to work on the 30 percent quota. We will draft legislation to submit to Congress, and are seeking support from different parties to get it passed during this legislative session. We have support from the Ministry of Gender and Development. I hope this year the women’s caucus will get the quota law passed. And the quota law will not be limited to 30 percent; we see that figure as a basis for future improvement. After the war, a lot of negative things remain. Trying to work these things out, we developed growing gender awareness and turned to political parties to improve the situation.

One of our goals is to increase punishment for the horrible crimes committed during the war, especially against women. If we do not punish those crimes, other people will commit them tomorrow. We are working with women’s organizations, advocacy groups and others on this. We are also going to pass a law on corruption. Corruption is an issue for women, because of its impact on everyday life. Women have a lot of experience managing money. When they get microcredit, they pay their loans. That is one reason why we believe we can move our country forward. Women in Liberia were working before we were in public office. Our husbands died, our children died, and now that we are in politics, we are going to be at the heart of the system for a long time. The suffering encouraged us to get into politics. We are all politicians. This is Liberia’s history.

Our president is the first female president in Africa. We must work hard to ensure that she succeeds and to motivate African women. In Africa, we have a saying that after the men eat, the women come and clean the dishes. Since the men were fighting the war, they gave us the time we needed to clean the house and the country. Now, we have water, we have running water, medicines and more schools. We must make sure our girls go to school. I am thankful for the opportunities we had.

iKNOW Politics: What challenges do you face as a woman in leadership in a country that has been traditionally ruled by men? How important is it for women that Liberia’s President Johnson Sirleaf is the first African woman to reach that position? What kinds of strategies exist to include men in these processes of change to promote gender equality?

There are still obstacles and aggression from male colleagues. Men have held power for over 50 years, and power is not easily shared. Power is something that should be shared. Having the first female president in Africa is very good, because it encourages women to go to school and participate in organizations and politics. Many women think, “If she became president, so could I.” And because of their ambition to be president, they will go to school. And if they do not become president, they could be ministers, they could be members of parliament but we are definitely going to have an educated society.

The women’s caucus was formed to support this process — our president, our children’s ambitions, to make sure the path will be gender friendly. We are working with men. We cannot leave the men behind. We try to be fair with them. But they are very powerful, and they do not feel comfortable sharing power with us. Being a minority, we are not going to forfeit anything. We try to write laws with them, to move the laws forward. We did not come into power to belittle them. Gender is not just a women’s issue; gender involves men and women.

The best strategy is negotiation. We have to involve men and educate them. When we talk about the Gender Ministry, we are not talking about antagonizing men or making them less powerful. We are talking about equality, and the quota system is a step toward that. We try to encourage women to get involved in more aspects of social life, to become town chiefs, to participate in elections, in local councils and similar bodies.

iKNOW Politics: What are your expectations for the International Colloquium on Women’s Empowerment, Leadership Development, International Peace and Security, convened by the presidents of Liberia and Finland?

First, I hope it results in a strategy for working with men, to help them understand women’s rights and recognize that women are not a threat to them, that with us they should be stronger. We need strategies not only at the government level, but also in villages, in towns, in the home.

We need to consolidate our relations and networks. Support from others is very important. Knowing that other women care about you means a lot. Our strategy for women cannot wait. This is about empowerment. Sometimes we have beautiful ideas, but are afraid to stand up and speak out. Knowing that other women are speaking out encourages you to do the same. Coming together with our international friends gives us the opportunity to express our fears and limitations and find solutions. I am very optimistic about the benefits of this colloquium.

iKNOW Politics: What advice or recommendations would you share with young political leaders in Liberia and other parts of the world?

I would tell them that if they want to get into politics, they should do so with determination, the way men supposedly do. Even though you are a woman, do not take a traditional woman’s role in politics. It is not easy. You must be firm and focused, and you have to be a model for others, so girls and young women can follow. You must be transparent, to fight corruption. We have to work hard, because most of the men are waiting to see us fail. We must support one another in overcoming party line divides. One woman’s success is our success, and the success of women tomorrow all across Africa. The failure of the process in a country like Liberia will stigmatize women, not only in Liberia, but in Africa.

iKNOW Politics: What role has networking played and should it play in creating a voice and strengthening women’s role at different levels of government? Do you think iKNOW Politics is an important channel for helping women in politics accomplish their goals?

Networking is very important. It is essential to the empowerment of women. I have used it to gather advice from different sources when I need to solve problems. When I see a problem, I can call my colleagues and say, “I have this problem with my district; what do you think I can do?” They’ll tell me how they addressed similar problems. Networking means helping each other, especially because gender empowerment is a new issue in the world, particularly in Africa. I need my international women colleagues to watch my back while I watch my front. And I will watch their back while they watch their front. That is networking, and that is caring.