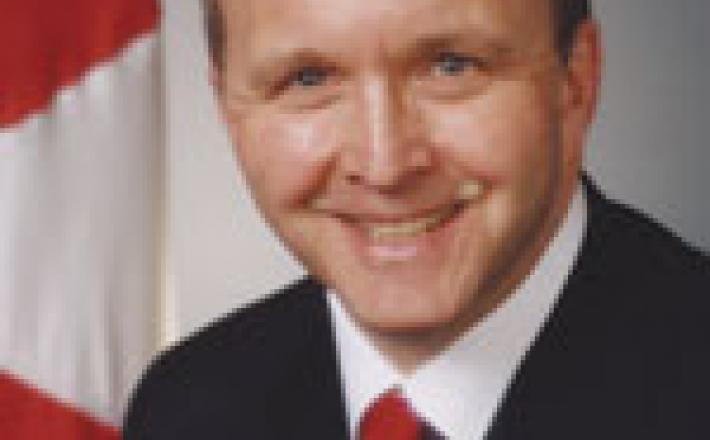 "I would also advise men in politics to talk to and meet with every woman you can think of who might run for office if she is encouraged and supported. This would eventually lead to greater numbers of women in politics.” - Grant Mitchell

iKNOW Politics: You have been a Member of the Alberta Legislative Assembly, Leader of the Liberal Party in Alberta and now, you are a Senator. Throughout your political career you have made gender equality a priority. What first sensitized you to the importance of this issue?

I think it emerged as an issue of justice and fairness in my mind first. Then I was encouraged in many ways to pursue it, in particular by a number of women in my caucus who were very strong on these issues. I am very driven by the thought that some people do not have the advantages of other because of bias, racism and arrogance. I try to promote women's equality issues in political platforms and legislation that I support and public speeches that I make.

iKNOW Politics: Often the challenge is to turn women political aspirants into political candidates. When you were party leader, what did you do to increase the number of women who ran for elections?

I believe that the leader of a party has a significant role to play in encouraging women to run for office. In many cases I found that all it took for women to take the decision to run was to be asked. Being called personally by the leader of a party shows women that they are taken seriously, and that they have support at the highest levels. While I was leader, I asked my supporters to identify key civil society leaders and party activists who were women, even if they did not belong to my party, and then I would spend a few hours every week phoning them personally to ask them to run for a seat in the legislature.

I did this because I believe we need the best people we can find for politics and you cannot do that if you are limiting your choices to little more than half the pool of good people. I found that women were often pleased to be asked but often said that they could not see themselves doing elected politics or they wanted to be in support roles. But I persisted, and in the 1997 elections the party I led elected almost 40% women (up from 18% in the previous election).

I did it by continually asking women to run and encouraging them to do so. I showed confidence in them and expressed it strongly, and I supported them in their ridings as much as I could. I always tried to encourage and groom the strong women around me to take on leadership roles, and I am pleased that when I left my position as leader of the party, three out of the four candidates to replace me were women, including the winner.

iKNOW Politics How do you think men in Parliament can promote equality for women?

When I was first appointed to the Senate, I made a point of attending the women’s caucus meetings, and I continue to raise and debate women's equality issues frequently. I think that these issues are not just women's issues, they affect men as well as women. Clearly, part of the solution will come with men's behavior changing. I think that the presentation of these issues can be strengthened in some senses by men speaking to them as well as women.

For example, in the Senate Finance Committee, when the Minister of Finance appeared as a witness to defend the government budget, I have asked whether there was a review of the differential impact of certain tax policies on men and women while drafting the budget. This kind of gender-sensitive budgeting and gender mainstreaming of legislation in government departments is still not done enough in Canada. I have also pushed for the establishment of a Commissioner of Gender Equality.

Such an office would create a platform through which it would be possible to raise important issues, such as equal pay, violence against women, etc. and to educate people about them. Many of the manifestations of these issues are very subtle and they need to be analyzed and clarified for the public. I think men and women in public office have an equal responsibility to raise and debate these issues.

iKNOW Politics: What do you think are the greatest barriers or challenges facing women who seek elected office in Canada? What can men do to help overcome them?

Based on my experience and observations, I think raising money and getting winnable ridings are the two greatest barriers to women entering politics. Both of these challenges are related to networking skills and opportunities. However, I was not a really great networker. I just knocked on doors and campaigned a lot. I think networks – whether online or in person – are a key to success in politics. You need to spend a great deal of time getting known in your constituency and building the relationships of trust with the people you hope to represent.

When I went door to door, I used to keep notes about what people said to me, for instance if someone was concerned about health care because their mother needed a hip operation, I would make note of this and the next time I went to that house I would ask how their mother was doing. These kinds of inter-personal skills go a long way in politics; it is a form of leadership that often comes naturally to women. I don’t think women need to change their style when they enter politics, some of the most successful women politicians I know were able to do so because they stayed who they were and brought in a new kind of participatory politics. But often people skills and leadership skills and hard work are still not enough.

In my party there are quotas for women delegates to the party conventions, where we elect our leader, our executive members and vote on party policies. At any convention, at least 50% of the participants must be women. In addition there are quotas for young people, aboriginal people and senior citizens. I am very proud that throughout my political career I was able to draw on support from strong aboriginal women, multicultural women and young women, many of whom were entering politics for the first time when they campaigned for me.

I feel it is important to encourage these women to move from support roles to leadership positions in the party. In my opinion, a leader should pay great attention to encouraging women to run in good ridings and to refer to them good and strong campaign organizers who can help them win. Additionally, mentoring is important for both men and women, which can help directly. I also challenged women who said they really just want to do the behind the scenes work, and worked on building their confidence to run for office.

iKNOW Politics: Could you give us some more detail about the state of women’s political participation in Canada, both in political parties and in the legislative and executive branches?

There are far too few women elected and appointed to the Senate. The last batch of 18 appointments included only 5 women and all of them were put on the back bench. When Prime Minister Steven Harper met with President Barak Obama, there was only one woman in the meeting even though several other woman cabinet ministers had relevant portfolios. Also, there is a small number of women in the executive offices of the Conservative government.

Furthermore, the current government has cut the Court Challenges Program which allowed women to bring forward challenges to legislation on the basis of the women’s equality sections of the Canadian Charter of Rights and Freedoms. And they have closed 12 of the 16 Status of Women regional offices. To make things even more dire, the current Conservative government prohibits women’s organizations that conduct advocacy work from receiving federal funding. In the meantime, despite the fact that more women are running for Parliament, only 22% of those elected are women. Most party leaders have committed to increasing the number of women candidates in their parties, and there is progress being made, but not fast enough.

iKNOW Politics: Based on your experience, what do you believe are the best strategies for including men in processes for promoting gender equality, especially in political participation?

I believe it is encouragement from the leader. I think we should realize that any suggestion that women think differently than men is again a product of inbred bias. Men think differently than other men too. Determination, commitment and loyalty in the face of adversity are the several elements of toughness that really matter and I have never known these to be unique to men. Furthermore, I always advocate for stopping all sexist jokes and talks in public. I think both men and women should publicly criticize it when they hear such jokes.

Also, we should criticize anyone who chalks this kind of sensitivity up to "feminist women", because it really affects all of us. I also believe that it would help to appoint a man to deal with women's equality issues and to make sure he understands the issues and addresses them appropriately.

iKNOW Politics: If you were to make one recommendation, what piece of advice would you share with iKNOW members, particularly women candidates, as they progress in their political careers?

Remember that nothing is ever easy in politics. No one will give you anything. It is always a fight. Do not succumb to the stereotype that women are less inclined to fight or confront. Consider what happens when two or three women run against each other, which I do not think is less intense. You have to out work the others (knock on more doors) to win. While it may be that you are disadvantaged as a woman and that creates more difficulty, never operate on that assumption.

While they may be less onerous, men encounter difficulties too. It always takes huge effort to win in politics and so when you confront that realization conclude that that is just the way it is. It is because the stakes are high for running a country and ensuring the values you believe in prevail. I would also advise men in politics to talk to and meet with every woman you can think of who might run for office if she is encouraged and supported. This would eventually lead to greater numbers of women in politics.