Member of Parliament of Senegal 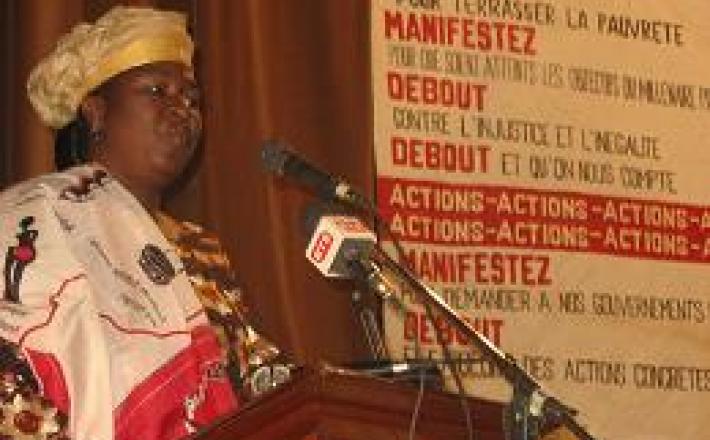 "I would like above all for all women interested in politics to know that, deep down inside, there is latent genius that holds and has the potential to create national wealth.” - N’déye Fatou Touré

iKNOW Politics: Tell us about your career. What sparked your interest in politics? What inspired you?

My career is that of an African woman from the southern Sahara born in a coastal, Sahelian country in an urban setting. Consequently, I started school at an early age and followed a normal education through primary, middle and secondary school, culminating in my baccalaureate (D stream).

Having pursued my studies at the former Faculty of Legal and Economic Sciences at the University of Dakar, I came first in the Bar internship competition. Next, I pursued a master’s degree in private law and was admitted to post-graduate studies at the same Faculty. As the only woman to have been admitted to the Bar competition in Senegal out of 174 candidates, I was co-opted by the then President of the Bar, the late Barrister Fadilou Diop, for an internship at his law firm from November 1984 to February 1988.

At the end of the internship, which lasted three years, I was admitted to the Bar Association of Senegal. And since the beginning of my internship, I have been a member of Amnesty International and the Association of Senegalese Women Attorneys (in 1985), where I am an activist to this day. In addition to these organizations that defend human rights in general and women’s and children’s rights in particular, I am an activist with the national human rights organization (ONDH), which is affiliated to the International Federation for Human Rights (FIDH), the Senegalese Human Rights Committee, the International Federation of Women in Legal Careers (IFWLC), Lawyers Without Borders, the International Criminal Defense Attorneys Association (ICDAA), etc.

Obviously, in parallel with my career as an attorney and my activism for the promotion and protection of human rights, I have always been a resource person for all women’s and children’s rights organizations and have spared no effort in combating violence against women and children, injustice, inequality and discrimination against women in my country. This unwavering commitment has earned me something of a reputation in all civil society organizations and even at UNPD, UNIFEM and other international organizations in Senegal and in Africa working to promote women. It was in this context that in August 2006, on the eve of the presidential elections in Senegal, I decided to join a group of civil society friends led by Mr. Mamadou Lamine Diallo, a mining engineer and economist at the World Bank.

Convinced of the need for Senegalese and African intellectuals to become involved in political life in our States, I agreed to run Mr. Diallo’s election campaign in his bid for the presidential elections of February 2007 before heading, a few months later, in May of the same year, the national list of a broad movement known as “Tekki”, which was formed to rally around President Mamadou Lamine Diallo. It was in this context that I had the honor of taking up a seat at the National Assembly of Senegal as the only MP from the Tekki Movement for the Emergence of Citizens. This movement would be transformed during 2007 into a political party called the “Party for the Emergence of Citizens” (PEC) which for the first time in our country place women at the top of the list and co-opted on the same list 49 women.

At the departmental level, at least six women were at the top of the lists for election by the majority system. It should be noted that for parliamentary elections, two types of election are provided for in Senegal for election of the 150 members of parliament: 60 members are elected on a proportional representation list with the winner being the candidate with the largest number of votes; and 90 members are elected in a one-round majority system vote based on departmental lists.

iKNOW Politics: Do you think that being a woman in politics has led to any additional challenges for you?

However, they do treat me with some discrimination, in particular when I advance my position on certain topics that they could agree with in substance (they tell me so in the corridors) but which they have difficulty accepting because they do not want to be seen as being “dominated by a woman”. Currently, my mission is not at all easy at the National Assembly due to the fact that first, I am an opposition MP from an emerging party (which some call a “small party”) and second, as a woman, I manage more or less to impose myself.

The fact of being in the minority poses several challenges for me within parliament: - the democratic challenge that obliges me to use my wherewithal to make my voice heard as an independent member of parliament not belonging to any parliamentary group (we are six in this situation, including two women); the challenge of being a woman and having to show and prove that a woman in the highest decision-making body is capable of defending the population through decisions in favor of sustainable development, fair decisions, etc.

iKNOW Politics: How do you effectively balance your responsibilities in public life and politics and your family and personal life?

I have to admit that it is particularly difficult for an intellectual woman “leader” in the sense of a decision-making body, to reconcile professional life with family life on the one hand and in addition, to give adequate attention to each of these “existences” along with political life, which has its own demands. You will understand that in a sociocultural context where women are relegated to inferior roles, women face major obstacles in their profession, politics and family obligations owing to sexist stereotypes, so yes; it is difficult to reconcile them. Their only consolation comes from their husband and children, who support them and who must deal with long and difficult absences. The demands of family life and the constraints of political life do not marry well.

No serious or valid reason can be invoked to justify discrimination against women in politics. Poverty, religion and/or tradition can in no way constitute an impediment to women’s participation in politics, especially as we know that there can be no political life without women, and no elections without women. They must aspire to all posts, all mandates, and all political and administrative offices in order to influence significantly decisions that have a real impact on their destiny. In Senegal, the first hurdle to women’s participation in politics is linked to the absence of active solidarity among women themselves, notably in political and civil society movements. The second hurdle is structural and has to do with the illiteracy and ignorance of women, who lack knowledge about their rights. Lastly, women are marginalized and often lack the means to devote themselves to political life, especially when they have no job. At the other end of the spectrum, they represent the electoral mass for politicians, for whom they constitute a clientele.

iKNOW Politics: Has networking and forming alliances with other women played an important role in your experience in politics?

Networking and alliances are an excellent if not the best means of promoting women in politics. Networking is starting to hold an important place in my parliamentary life. Non-governmental organizations and UN organizations are currently seeing in my parliamentary work a means of promoting gender issues. That is why they want to include me more and more in their activities such as seminars and workshops both at the national and international level.

iKNOW Politics: What advice would you give to young women, in particular Senegalese women, who want to get involved in politics?

The first piece of advice I would give to young women who aspire to politics is to develop their skills, become informed in order to master their roles and responsibilities and to strive for excellence, because women in politics will obtain nothing if they are not competent; everything has to be wrested by objective and convincing arguments. They must above all strengthen their alliances among themselves and with other women.

iKNOW Politics: What do you think about integrating new technologies in politics? What are the communication tools you use to reach out to your voters?

New technologies in politics are extremely useful because they facilitate very fruitful exchanges among women and between women and men. They allow women in politics to develop their skills in order to help them take up the challenges and overcome the obstacles they meet along the way. To reach out to my voters, I use in order of priority the media (radio and TV), mobile phones and visual materials (posters, flyers, illustrations, Internet sites, etc.).

iKNOW Politics: Please tell us about any legislation or initiative you have brought forward in Parliament in support of women? What are some goals you would still like to achieve?

The initiatives I have taken as part of my parliamentary activity are systematically to promote women, whose specificities have to be taken into consideration in the laws that we pass in parliament, in particular in the agricultural sector (agriculture, fisheries and livestock rearing) and in election matters (constitutional reform in order to promote gender parity in elected and non-elected offices and posts). I was actively involved in drafting a bill on strengthening the repression of all forms of violence against women and children (Committee on reforms, etc.) and obtained from the Minister of Justice and the President of the Bar legal assistance for all women and young girls who are victims of sexual abuse and for women in troubled marriages or whose rights as widows are jeopardized.

As a member of the National Assembly Committee on Finance and the Economy, I do not cease to sensitize the ministers about gender-sensitive budgeting. As a member of the Committee on Laws, on Labor, on Decentralization and on Human Rights, I was the author of over a dozen amendments to government-proposed texts on safeguarding human rights in places of detention and on application of the Convention against Torture (and Other Cruel, Inhuman or Degrading Treatment or Punishment).

In parliament, I was the author of several oral and written questions on topical issues such as the hike in the price of basic foodstuffs, which affected households and therefore women, soaring energy prices (which prevented women in the informal sector from carrying out their activities) and the need to take measures to increase the revenue of people in rural areas. What I would like to leave behind for women in politics is the realization that, through their competence, determination and commitment, women must be able to participate fully in decision-making with a view to influencing significantly the economic, political, social and cultural life of their country.

I would like above all for all women interested in politics to know that, deep down inside, there is latent genius that holds and has the potential to create national wealth. I would like African women to be able to strengthen their networks and coordinate their struggle to eliminate all forms of discrimination against them. This African networking should be in synergy with all networks of women in the world in order to enhance their participation in political life and beyond.