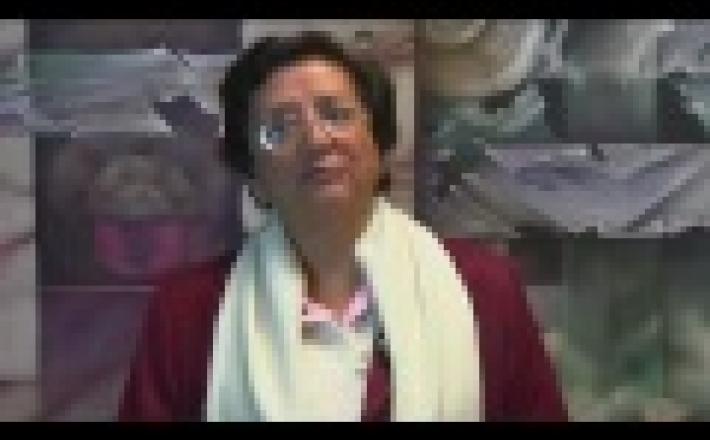 “The lesson I have learned is, you listen to the people. There are some leaders that think they know it all, they always tell people what they want done. For me, I listen to my people.” - Regina Musokotwane

iKNOW Politics: You are a Member of Parliament and chair of the women’s caucus. Based on your background and your experience as a teacher, how did this help you meet the challenges of your current position?

Well, maybe as a teacher the challenge I had was I was teaching children from different backgrounds and that made me think that it shouldn’t be like that. Though I was teaching in urban areas because I was married and was in urban areas most of the time, I grew up in the rural areas and my mind was in rural areas; and I went back to the village to see how the people were living. My husband joined politics in 1973 when he became a Member of Parliament.

I helped him in his constituency while I was teaching myself. During the holidays, I would go with him to his constituency; I would see the women suffering in the clinics. After my husband passed on, I was still a civil servant. And in 1996 when my husband died, people came and requested if I could take his place in the constituency but at the time I said no, I was still a civil servant. In 1999, I applied for retirement though I had not reached retirement age, but I told the government that I wanted to join politics so they let me free, they retired me and I joined politics. I used to go around with my husband, I saw what he did: he built schools, he built clinics, but when the other MPs came, there was no big difference from the time when my husband left and I thought, if I go into politics, I might begin where my husband left.

This is my second term now and I think I’ve made a difference because now we have a high school in my constituency which we have not had since independence. Now we are building a youth training center which has never been there because being a rural constituency, our illiteracy levels are very high because most of the schools end at either grade 7 or grade 9 and children have nothing to do after that, we had no high school. Now we have a high school where children can go. Those that finish at grade 7 or grade 9 can go to training at the youth center on carpentry, bricklaying, agriculture. Then they’ll be self-reliant. I think I have achieved something although I still want two more high schools in the constituency for me to be comfortable.

iKNOW Politics: What is the situation for women in politics in Zambia and did you face particular challenges because you were a woman, and how did you overcome those challenges?

The only way to overcome those challenges is to go head-on. You don’t think about what your male counterparts are saying. Because when I joined politics in 2000, we were 8 candidates. Of the 8 candidates, 2 were women and 6 were men; and of the 2 women, the other woman was the incumbent Member of Parliament. The person who really had the challenge was me. I ignored what men said because men were saying, “you know she’s a widow and she’s the one that killed her husband” but I had explained to the people that to me, the issue is not who is who.

My coming into politics is because I want to help those people. Those are their problems; I feel those problems because I live with them. Most of the men that came to stand came from town. They came from places where they had drinking water; they had electricity; their children went to good schools with good teachers. How are those people coming to help these people? They’ve not lived with them; they do not know how they are feeling. So I said to them, it is better to have a woman as a Member of Parliament than a man because a woman is going to feel for the other women. If you lived in my constituency, we still have women that get up at 4 in the morning to go and get water and don’t come back until 10 or 11.

iKNOW Politics: This is your second term in Parliament and you are Vice Chair of the Constitutional Commission. Do you find that your leadership style has changed from the time you were accompanying your husband to getting elected as a member to now being vice chair of the constitutional commission?

iKNOW Politics: If you were to give advice to a young woman who is just starting in politics, what lessons would you share with that person?

Secondly, when the people talk to me, I have to go to Parliament and tell Parliament what people say and what people want. That is how I came to get this youth training center and high school. Then you bring yourself to the level of your people. I don’t want to think “no, our MP is up there, we can’t approach her, we can’t talk to her”. For me to be approachable by my people, I need to bring myself to their level. It’s the only way I can understand what they’re saying and the only way they can understand what I’m saying to them. When I’m talking to them, I need to talk to them about issues that affect them, not issues I’ve seen elsewhere. So if there are women who want to join politics, it’s very important for them to listen to what people want. They shouldn’t do what they think people want, you do what people want.

Secondly, they should bring themselves to the level of their electorate. They should start in time. Most of our women, who go into politics, start when they dissolve the government, so it is not easy for a woman. If they have plans to be Members of Parliament, they need to start 2 or 3 years before. If possible, 5 years before they need to start going to those constituents and identify themselves with the people there and be with the people most of the time; try to help them when they need your help. For me, I went into the constituency 2 years before I retired when I was still a civil servant.

At the time, civil servants were not allowed to be in politics. I constructed a team and gave them all the facilities they needed and for 2 years my team went around to the constituency talking about me, what I can do if I came. By the time I retired, most of my work was already done. This is what the young women should do. They should not wait until the last minute because we have a problem as women, we don’t have a lot of resources. Men have a lot of money to bribe and buy but for us, we need to start in time.

So that by 2 years, 3 years people can come to know what kind of person you are. Even if a man brings loads and loads of money they will know that this man is just buying them. And they will get the women. The young women that want to be in politics need to start way before the men start, they need to bring themselves to the level of the electorate and they need to listen to the people because I always tell my voters that, the fact that you voted for me, doesn’t mean that I’m more intelligent than all of you or I know it all – no – your brains and my brains put together – then we do something.

iKNOW Politics: You are the chair of the women’s caucus. How would you say that the help of other women has helped you in your career?

In the last parliament, I was the secretary of the caucus and in this Parliament, I am the Chairperson of the caucus. We met regularly with the other members of Parliament, sharing notes; in fact, we wanted to visit each other’s constituencies but unfortunately, funds are a constraint to us because we are not a Parliamentary committee and are not funded by Parliament. We have to look for funds elsewhere. So we want to help each other by going into each other’s constituencies, help each other to campaign. We haven’t stopped looking for funds, we are still looking. We also attend a lot of workshops and we write a report for the other members to see what they can do in our constituencies following the report.

iKNOW Politics: Is there something you’re proud of that you’ve been able to accomplish for women through your work in politics?

What I’ve really accomplished for women in my constituency is the high school because a lot of the children there would enter into marriages after grade 7. With the building of the high school now, they will go to school and complete their secondary education. The building of the youth training center also, because even those that don’t have a high level of education will find something to do there and I am going to make sure it is 50/50 % – there will be 50 girls and 50 boys, that I will make sure. I told the government, the Minister of Education was laughing, that when the high school is complete, no child is going to come from outside the constituency until all the children have places, then we will think of children from other constituencies.

I think that is an achievement for women and I am going to press on the Minister that at least 50% of enrollment is going to be girls, I’m sure that can be done. I think the other achievement is, before I became a Member of Parliament, I belonged to a women’s organization called the Forum for Women’s Education of Zambia – it’s a global organization with headquarters in Nairobi – we impressed on government that when girls get pregnant in school, they should be given a second chance and now that is policy in Zambia. If a child gets pregnant in school, she can go and deliver and come back to school and all the head teachers know that they must be given back their place in school and that is something I am very proud of.