Deputy in the Iraqi parliament 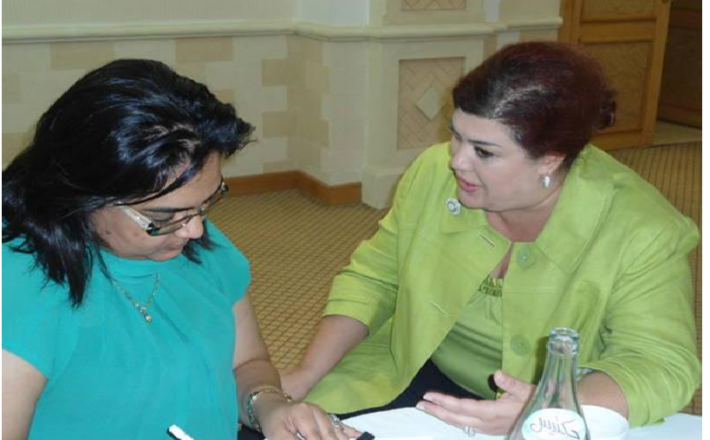 "My message was that the new Iraq should be built based on the equal participation of men and women." - Safia Sohail

iKNOW Politics: Please tell us about the beginning of your career in politics?

Though it was a personal choice, my father played a role in it. We were seven sisters. My father was one of the Iraqi opposition leaders and worked in politics for many years. He then moved into self exile in Jordan. He was assassinated in 1994 so the beginning of my political career was my choice without even consulting my family.

I started volunteer work as a teenager in Jordan, in school and then at university - ever since I was 13 years old. Though my father was an Iraqi tribal leader, he never discriminated against women. He was keen that we were educated and he encouraged me to write in the media and participate in political discussions, especially since our home in Jordan was a meeting place for the Iraqi opposition. All this helped form my political orientation. I studied Public Administration and Political Science.

I continued to participate in political meetings after his assassination in 1994. My interventions were always centered around the importance of women's genuine political participation. Sometimes, I was alone in these meetings and I have always had independent opinions. My message was that the new Iraq should be built based on the equal participation of men and women. I returned back to Iraq in 2003 where I attended the first meeting of the Iraqi political factions, which included opposition from both home and abroad. My interventions then were to say that Iraqi women represent 60% of the population and that, we women, will not accept anything less than full partnership during the transitional period and beyond.

iKNOW Politics: What were the challenges that you faced as a woman in a leading position on the political scene during the (post-Saddam Hussein) rebuilding phase in Iraq?

The most important challenge I had to face was the quota system that the Iraqi political factions adopted to determine who can assume responsibility in various ministerial and political posts from party members and individuals loyal to the head of the party list or associated directly with them.

Governments formed since 2003 were all based on alliances between different political movements which managed to acquire seats in the parliament. They all joined the government, each according to his weight, and when a government is formed according to political compromise; the composition of the government depends on the choices made by the different political parties. These parties give precedence to party leadership and since this leadership is mainly assumed by men and no woman would be on the top of a party or coalition list, women are not nominated to prominent positions.

More than once, I have been offered the position of State Minister for Women's Affairs but as a woman politician with a long track record in politics, I feel I can participate in the decision making process and am entitled to assume different Ministerial offices. This is not to belittle the importance of the ministry of Women's Affairs but I refuse the confinement of women to specific issues and posts. A woman is entitled to a political position enabling her as a decision maker. This is to safeguard women's rights and a statement that women are a real partner in the political process.

iKNOW Politics: What do you feel are your most important achievements throughout your political career?

During my political career I dealt with many files concerning human rights – mostly women's rights- and I have focused my interventions in the parliament on the issue of justice in particular for the families of war victims and martyrs. I have organized the first conference of Iraqi women in Iraq after the fall of the Saddam regime. I chose "The Heard Voices of Iraqi Women" as a slogan inspired by my own campaign, "The Unheard Voice of Iraqi Women", for the conference. The timing of the conference was most important and so were the discussions that took place amongst women activists from different governorates during the conference. They discussed constitutional rights, legal rights, education, health and culture. The conference was held in the current parliament building in the conference center in Baghdad. The conference adopted specific recommendations, namely political participation, legal and constitutional rights and the necessity of new legislation or amendments to existing legislation. Discussion about the quota system was not easy but a 40% quota was finally agreed upon as well as the necessity of establishing a Ministry for Women's Affairs and of a Supreme Council for Women – but this law was not presented to parliament yet. What was presented in 2011 is the proposal to transform the Ministry of State into a Ministry with full functions.

iKNOW Politics: Why have you avoided joining any political parties?

The reason I'm not a party member is that according to my experience, there is no liberal party truly embracing freedom of thought. I have entered into alliances with the lists of the year 2005. I entered into alliance with the Eyad Alawy list. Then, a year later into parliamentary life, I felt that the head of the party was taking decisions without consulting the rest of the list so I withdrew from the list. Upon my return to Iraq in 2003, I also held an ambassadorial post. Being independent is difficult but belonging to a party that does not represent my views about the civil state is also difficult.

iKNOW Politics: what are your future plans?

I intend to continue work on women's social and economic issues, in particular human trafficking, widows and divorcees as well as supporting women's political participation.

iKNOW Politics: What do you think of iKnow Politics?

The network is useful in raising awareness and connecting women activists internationally. I will draw the attention of Iraqi women activists to it especially since the platform offers an Arabic site which would facilitate communication.