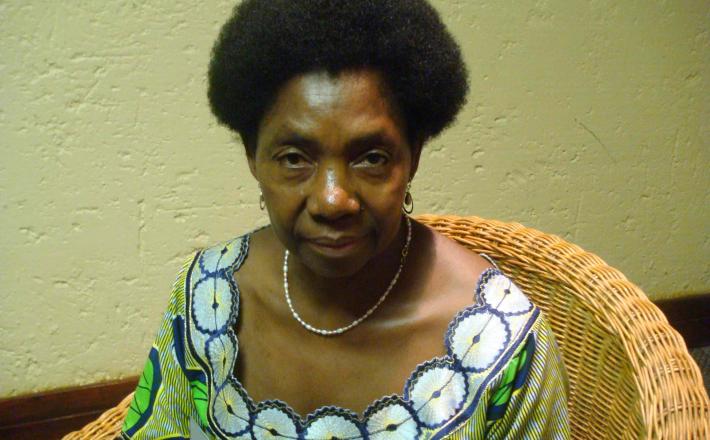 "I believe that women are women no matter where they are and if there are womenfolk either in Europe or America or Australia who have advanced in certain fields we must be open to network with them so that we can exchange information and be in solidarity with each other.” – Violet Sampa Bredt

iKNOW Politics: You entered politics from a field that is a little bit different, you started in the church. You were the first African woman ordained in the United Church in Africa and then you entered politics. Now you’re a Member of Parliament and vice chair of the women’s caucus. Can you tell us how your background in the church helped you as a member of parliament?

I must say it was very interesting for me to come from a church background where I was ordained as the first woman minister in the United Church of Zambia and the first ever ordained woman clergy in Africa. I had a lot of challenges, first of all, to enter the church ministry because at that time it was unheard of for a young woman to be accepted for ordination, but I did go through a lot of difficulty and I overcame these things. I served my church faithfully at different levels for five years.

I rose to the highest church rank one could ever think of, I served on the central control of the World Council of Churches for seven years, I was for ten years the undersecretary of the Council of Churches in Zambia. After I retired from my church assignment I thought I should go home and rest and maybe be with my family because in those days I was hardly at home and I regretted that my children never saw much of me. But again I thought, “The boys have grown up, what should I do at home?” The community, both in the church and in society, was demanding that I should go back into active work. Either in politics they were suggesting, or in the church as a volunteer. I was already doing volunteer work.

iKNOW Politics: What motivated you to go into politics?

Within my locality, I saw that I could actually move into the political arena and do certain things and that’s how I adopted an interest to go into politics, but I didn’t know exactly which party I wanted to join. After deep considerations and observations of what was going on in Zambia I felt one of the political parties and its manifesto appealed to me very much and this is the Patriotic Front. They were talking of social issues and they wanted the transformation of the poor Zambian people and I said, “This is more or less the work I have been doing in the church, maybe I could try it out from the political point of view.” That’s how I joined politics and it was quite interesting.

The difficulty was the entry point to win an election where I had very little experience in how to convince voters. There were a number of men who were contesting in that constituency which I was assigned to. We were eight of us, but fortunately I got the highest vote. And I found myself in parliament at the end of 2006. That’s how I got into politics. And I have found it extremely interesting to be a member of parliament because you are learning so many things. Unlike in the church, where I was more focused on the churchly things and I was only touching or transforming the community. But here you are hearing about a number of issues from across the country from different people—what they do across Zambia and beyond Zambia, so I have found it very nice.

But as a woman also in parliament I sometimes get very perplexed. When I hear many debates it’s business for them, it’s for me a little bit far removed from touching the people, feeling the people. It’s like you are debating, but not really close to the people on whose behalf you are talking. This is sometimes the difficulty that I face with what goes on in parliament, but we are with Zambian women parliamentarians, both from the rural area and the town setting, we try to make a difference because we see that we are mothers. How can we transform the problems of our children and our sisters from the legislative point of view? And of course being a minority, it is oftentimes not easy. But the voice does get heard. It’s a slow process, knowing very well that our parliament is male dominated and is very much patriarchal.

So sometimes when gender issues come in, males tend to not take it so seriously, but I’m enjoying my work and I hope I can make a difference especially to the women of my constituents—the young women, the struggling mothers, and the community at large.

iKNOW Politics: How would you define your leadership style? Has your style changed now that you’re a member of parliament?

I think for me it’s probably too soon to say I dramatically changed. I am still the same Violet who wants to engage people in whatever I do. I don’t see myself really as a leader, but I see myself as a facilitator. Perhaps this is not appreciated by many people, who want me to be the leader, but I want to carry along with me the people in whatever I am doing and to achieve results is probably not very easily visible. However, I am ready to learn new skills which politicians do. I think I am still very much in the church way of doing things.

iKNOW Politics: You’re the vice chair of the women’s caucus. Do you think that having a women’s caucus and having other women around to support you helps you in your political career?

Oh, it is very fantastic. Especially in the women’s caucus, we have a chairperson who is very experienced. I always look to these women who have been in parliament before and who have been helpful, who want to carry the new ones along with them and I think it is from them that I am learning a lot of things—especially those who are very positive and want to make a change. Who have vowed that they have gone into politics not because they want to be like men, like I went into the ministry of the church not to just go and be like the clergy but to go and be a woman minister and understand the church as a woman and not as a man. So I am learning from those other women in the caucus who are trying to make a change in parliament.

iKNOW Politics: What advice would you give to a woman who’s just thinking about starting out in politics?

I think never to give up and to be strong and to be focused. To really know what one wants to achieve in life because oftentimes we tend to be discouraged as women, but I urge all the women who want to venture into politics to be very strong, to be truthful, open and to be women of credibility. We need to make a difference from men politicians.

I think that too is an advantage because it becomes an eye opener to know what other women in other continents are doing. I believe that women are women no matter where they are and if there are womenfolk either in Europe or America or Australia who have advanced in certain fields we must be open to network with them so that we can exchange information and be in solidarity with each other. That’s how I see this women’s network working.