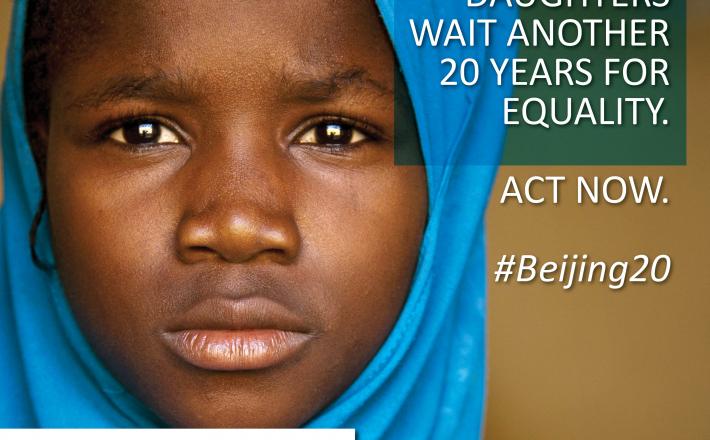 Context and origin : The Beijing Conference took place in September 1995 and was the Fourth World Conference on Women. The previous three were respectively held in Mexico City in 1975, Copenhagen in 1980 and Nairobi in 1985. The Commission on the Status of Women (CSW), the principal global intergovernmental body exclusively dedicated to the promotion of gender equality and the empowerment of women, organizes these conferences.

Every five years, the commission meets to discuss current actions and to determine the advances that have occurred in achieving the objectives. Beijing +20 is the conference to take place 20 years after the one held in 1995, which saw a real program of action and a platform being produced to help countries achieve the goals they had committed to achieving. Beijing 20+ is likely to take place at the UN Headquarters in New York from 9th to 20th March 2015.

Objectives and actions During the first World Conference on Women, 12 critical areas of concerns were identified. These remain a powerful source of guidance and inspiration.

Education and training of women

Women and the economy

Women in power and decision-making

Institutional mechanisms for the advancement of women

Women and the media

Women and the environment

Represented countries agreed to promote equal responsibilities and shared decision making between men and women in the domestic sphere and in the work sphere but also nationally and internationally. Gender equality is not only a Human Rights matter, it is an essential condition for social equality and a critical element for countries to make progress and preserve peace.

Discussions will be based on recommendations from the 23rd special session of the General Assembly (Beijing +5), which is the first five-year review and appraisal of progress made in the implementation of the 12 critical areas of concern in the Beijing Platform for Action and highlighted further actions and initiatives for overcoming obstacles to the implementation of the Beijing Platform for Action. The discussions are intended to implement concrete actions to succeed in empowering women and achieving gender equality. A review will then be requested and will be conducted globally, nationally and regionally. Countries will give details concerning challenges, obstacles and victories in implementing the objectives of the 1995 Beijing Conference.

For more resources on Beijing +20, please check out our Special Feature.