Summary of the e-Discussion on "Parliamentary Oversight of Gender Equality"

Summary of the e-Discussion on "Parliamentary Oversight of Gender Equality" 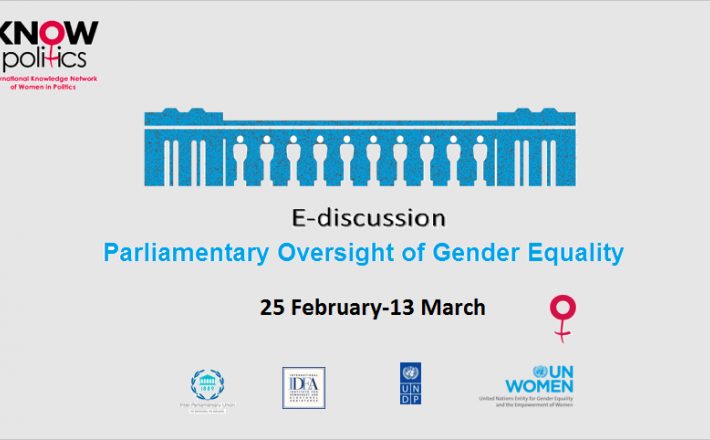 The e-discussion was hosted on the iKNOW Politics online platform and received thirteen contributions, nine in English and four in Spanish. The contributions were submitted by international organizations, Members of Parliament, judges, policy specialists, academics and civil society.

The thirteen contributions made to the e-Discussion on “Parliamentary Oversight of Gender Equality” were consolidated by the Team managing the International Knowledge Network of Women in Politics platform (iKNOW Politics). The following summary highlights the key experiences, practices and recommendations resulting from the online discussion, which was hosted and moderated on www.iknowpolitics.org

The establishment of instrumental mechanisms to ensure adequate control of gendered oversight is necessary. Among the structures identified of having positive impacts on parliamentary oversight of gender equality are women’s caucuses or gender and human rights committees.  Alternatively, gender can be treated as a cross-cutting issue, affecting all policy areas.

It was agreed that oversight mechanisms, often limited to parliamentary questions and requests for documentation, should be improved and expanded.  Some countries have taken measures to address this shortcoming. In the Spanish parliament for instance, a procedure to monitor the effectiveness of the Law Against Gender-Based Violence (LO 1/2014) was developed and as a result improved the quality of the oversight process. After the passing of the Integral Law Against Gender Based Violence and the Law of Equality, both declaring new rights, jurisprudence was effectively articulated and implemented, together with a reform of the Penal Code. In addition, the role played by the seventeen Autonomous Communities of Spain has sometimes pioneered the advancements of gender equality at the national level, culminating in the creation of the Ministry for Equality in 2008 and gender related issues being discussed under the legislative Commission of Equality.

In the context of Argentina, gender equality laws are very important; for instance, Argentina was the first Latin American country to establish legal quotas, institutionalizing the 30% mark for women candidates in political parties’ lists. A good example to promote gender equality came from Mexico, where both, the Chamber of Deputies and of Senators of the Federal Congress have Commissions of Gender Equality. Both Chambers also have dedicated structures for the implementation and planning of gender equality actions within the Congress.

A contribution from the European Parliament emphasized that for the gender mainstreaming process to succeed, it must go beyond gender budgeting. For instance, the European Parliament, with the support of UN Women, established monitoring and reporting processes to oversee the implementation of the Convention on the Elimination of All Forms of Discrimination against Women (CEDAW). For instance, the Women’s Rights committee work to ensure that all policies made address “double victimization” – women who are disabled are vulnerable to violence because of their gender and their disability. In addition, the European Parliament recently voted on a report on mainstreaming gender in the institution, including specific measures to promote work- life balance. Structures, such as the European Union Committee on Women's Rights and Gender Equality, played an important role in advancing legislative changes.

Parliaments are key drivers in the development of solid monitoring processes of gender equality and can set a precedent for other institutions.

Parliaments with higher rates of gender balance were found to be more effective in their oversight function. [1] Promoting gender balance in parliament is thus essential for increasing legislative capacity, performance and legitimacy. Women caucuses, such as the one created in the National Senate of Argentina in 2008, the ‘Banca de la Mujer’, complemented the Parliaments’ efforts to improve the monitoring system (articles 2 and 4 of the caucus’ constitution), as well as the effective implementation of international treaties related to gender equality. Also the “Bancada femenina”, the women caucus of Uruguay, is seen as a regional reference [2]; it helped to develop legislation related to domestic service, parental leave for adoption, workplace sexual harassment, etc.

Several institutions can support Parliament in the monitoring process, such as civil society, audit institutions and other decision-making bodies. Supreme Audit Institutions (SAIs), for instance, can facilitate gender responsive budgeting by collecting and sharing the required information throughout the entire budget cycle.  In the planning stages, Ministries of Finance need reliable revenue projections to outline macro-economic policy frameworks and make realistic allocations.  Parliament needs access to facts and figures on a regular basis to review revenue projections, assess proposed allocations and monitor spending. The European Commission works with EU member states to transpose and implement EU law that relates to equality and non- discrimination. As such, the Directive on Combating Trafficking in Human Beings was successfully implemented.

Civil society, and in particular women's groups are important drivers of change and in collaboration with Parliament initiate processes with positive outcomes on gender equality. Increased numbers of women in Parliament usually strengthens collaboration with feminist and women's groups.  National Councils for Women and NGOs can support the efforts made by women parliamentarians, for example by advocating for the establishment of quota systems.

Dialogue between civil society and public representatives to ensure steady advancements on gender equality is key to oversight, with elected representatives, advisers, and assistants establishing regular consultations with women’s groups on gender-related policies.  The nature of these dialogues can be both, national and international. One respondent for example travelled to Ethiopia with three other female colleagues from the European Conservatives and Reformists Group and met with female politicians and women's rights groups from all over the world. Networking and awareness about global trends relevant to addressing women’s needs and issues were identified as important elements to further advocate for changes in national legislation.Nationally, open doors days are considered useful to improve the relationship between Parliament and civil society and, in particular, with women associations.

In Argentina, for example, meetings in Parliament with women’s organizations advocating for gender equality and quotas had positive impacts on other legislation important to the national context such as gender-based violence, LGBTI issues, and women trafficking.

On the importance of making gender mainstreaming a crosscutting issue, the call for an in-focused perspective was made. In Spain for example, the work of the Equality Commissions, together with advocacy campaigns by women activists, made that gender equality is perceived a pre-condition of a functioning and inclusive democratic system.

Adding a gender perspective on each policy area of parliament, including health, education, security, international relations, remains, however, in many countries a challenge. The role of ideologies and structures of political parties influences the way MPs deliver on the gender-equality agenda and how they participate in oversight activities. Being part of a women caucus was identified as a possibility to overcome potential barriers. Given its cross-party nature, women caucuses allow for alliances on issues such as sexual and reproductive health or to the fight against gender-based violence, among others. In Moldova, for example, the Women MPs Platform improved the participation of women in decision-making, through regular policy consultations with underrepresented women. With the help of United Nations Development Programme (UNDP), five Regional Forums that have debated issues pertinent to the SDGs frameworkwere organized, where above 200 women preponderantly from vulnerable groups for the first ever time received the opportunity to address their concerns directly to decision-makers.

External support from specialized bodies was recognized as essential for MPs to develop and improve oversight mechanisms. The UNDP for example helped to ensure women have the skills and support to work effectively within and with political parties and parliament. 39 of UNDP’s 68 parliamentary strengthening projects specifically promote parliamentary oversight of gender equality and women’s empowerment.  The projects include for example gender mainstreaming in parliament (quotas, rules of procedures, etc.), gender legal reviews and promoting gender-sensitive laws, candidate training, induction and mentoring programmes; and awareness campaigns to counter gender stereotyping of candidates. Good examples of countries in which UNDP had implemented different programmes to enable mechanisms for parliamentary oversight of gender equality, include the PALOP, Colombia, Swaziland, Nepal, Guinea-Bissau, Moldova, Rwanda, Kosovo, Bosnia and Herzegovina, El Salvador, Nigeria, Jordan, Lebanon, Somalia, Sudan, Gambia, Tunisia, Argentina, and Iraq.