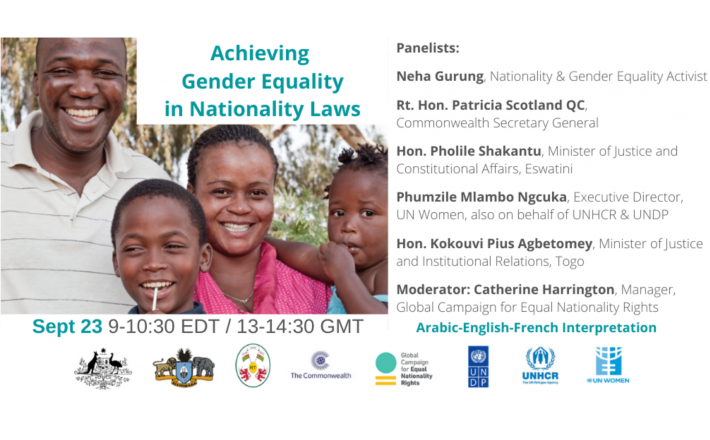 As the world confronts the COVID-19 pandemic, gender discrimination in nationality laws is exacerbating the hardships facing affected families. With the widespread closing of borders to all but citizens, many families affected by gender-discriminatory nationality laws are facing family separation or the inability to return to their homeland. In numerous countries women’s non-citizen children and spouses are being denied access to pandemic economic relief benefits. As many of these families already faced financial insecurity pre-pandemic, due to the inability of women’s non-citizen children and spouses to access formal employment, these families are especially harmed by their inability to access government relief.  Gender-discriminatory nationality laws have also added to the hurdles faced by women trying to extract themselves from abusive relationships at a time when GBV is tragically increasing amid stay-at-home orders.

Though such laws were traditionally the norm across the globe, significant progress has been achieved in securing gender-equal nationality rights. In the past fifteen years, nineteen States have reformed their nationality laws to advance gender equality. Momentum for reform is also increasing at the regional level, indicated by the establishment or regional declarations calling for the eradication of gender discrimination in nationality laws including the Arab Declaration on Belonging and Legal Identity (2018), Abidjan Declaration of Ministers of ECOWAS Member States on the Eradication of Statelessness in West Africa (2015), and a pending Protocol to the African Charter on Human and People’s Rights on the Right to Nationality, presently under consideration by the African Union. At the international level: UN Women launched the Equality in Law initiative in 2018, which prioritizes the reform of gender- discriminatory nationality laws as one of five key areas of legal reform; in October 2019 UNHCR marked the midway point of its ten-year #Ibelong Campaign to end statelessness, which counts ending gender discrimination in nationality laws as Goal 3; UNICEF is supporting efforts to achieve gender-equal nationality rights, through the UNICEF-UNHCR led Coalition on Every Child’s Right to a Nationality; and in June 2016, 107 Member States cosponsored the UN Human Rights Council Resolution, “The Right to a Nationality: Women’s Equal Nationality Rights in Law and Practice.”

Against this backdrop, the Global Campaign for Equal Nationality Rights2 in partnership with The Governments of Australia, Eswatini, and Togo, The Commonwealth, UN Women, the UN Refugee Agency, and the UN Development Programme will hold the virtual High-Level Side Event “Achieving Gender Equality in Nationality Laws,” during the 75th UN General Assembly. At the event, panelists will discuss lessons learned from reform processes and highlight the significant benefits of gender-equal nationality rights to citizens, their families, and society as a whole. The event will also emphasize the reform of gender-discriminatory nationality laws as critical to upholding gender equality, ending statelessness, and the achieving sustainable development.