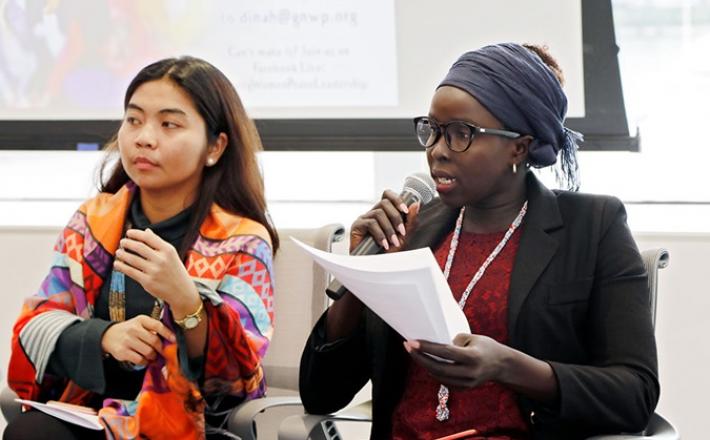 “We young people, individually and collectively are a piece of peace”, said Lynrose Jane Dumandan Genon, a representative of the Young Women for Peace and Leadership programme of the Global Network for Women Peacebuilders in the Philippines, speaking at a side event in New York on 25 October, on the sidelines of the annual UN Security Council Open Debate on women, peace and security. “We do our part in making peace happen in whatever community we are in; we bring our little pieces together to create a bigger impact,” she added.

Genon is among a new generation of young women leaders who are taking a stand against discrimination, promoting women’s rights and are at the forefront of community efforts to prevent conflict and sustain peace. For these young women, the road to peace and their participation in the peace processes is long and riddled with barriers.

The event organized by UN Women, the Global Network for Women Peacebuilders, UNFPA, Peacebuilding Support Office and the Permanent Missions of Bangladesh and Finland, brought together young women from four countries to share experiences and speak about their peacebuilding work. A dialogue with policy makers—Member States and UN experts—provided the space for discussion of the impact of violent conflicts on young women, and the actions they are taking to build peace and prevent conflicts.

Emilie Katungu Katondolo, a member of the Young Women for Peace and Leadership programme in the Democratic Republic of Congo highlighted how participating in entrepreneurship training and gaining economic independence enabled her to more fully participate in her community.

“How can we support and promote the work of young women? The first step is events like this, providing the space for young women and raising awareness,” said Kai Sauer, Permanent Representative of Finland to the United Nations. Ambassador Sauer highlighted that as Finland works on the first National Action Plan on youth, peace and security and UNSCR 2250, they’ll work directly with youth.

Young women panelists also called on those in positions of power to take youth voices seriously and include them in conversations.

“It is overwhelmingly obvious that youth want to be the change. We hear it every time they speak. They are trying to be the change,” said Katrina Leclerc, a Programme Coordinator for the Global Network of Women Peacebuilders Young Women for Peace and Leadership programme. “We need investments in meaningful participation of youth as global citizens, and we need spaces for young people to gather.”

The event also featured a background paper on young women, peace and security, developed by UN Women as a contribution to the Global Progress Report on Youth, Peace and Security (mandated by the Security Council Resolution 2250 (2015)). Sophie Giscard D’Estaing, Peace and Security Analyst with UN Women in the Arab States region, presented the paper and emphasized that often youth is viewed as only young men, and only well established, and respected – adult women are viewed as peace and security activists, while young women are often marginalized and discriminated in both policies and programmes related to peacebuilding.

The paper calls for clearer reference to the diversity of women and youth in future women peace and security and youth peace and security resolutions and policies, and that inclusion should not be limited to young women’s protection or addressing discrimination, it should also emphasize the positive and transformative role that young women play in building sustainable peace. The agenda needs to include the provision of technical and financial support to peacebuilding initiatives by young women.