Australia: Record numbers of women are having babies in the Federal Parliament and now coronavirus might help them

Australia: Record numbers of women are having babies in the Federal Parliament and now coronavirus might help them 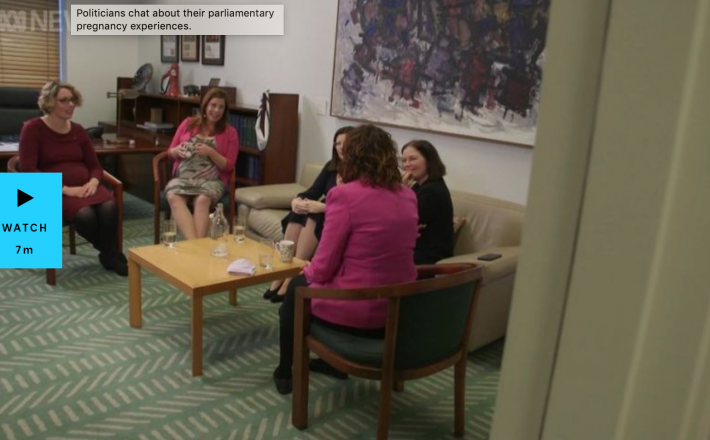 There's an unusual sense of calm inside Lisa Chesters' office.

A green square inside her clock is flashing as bells ring throughout the building.

But she's in no rush to leave. Gone is a Pavlovian response to bells, where everything is dropped to rush to the green-clad House of Representatives to vote.

Once-busy halls are all but empty. Events have been cancelled, the public locked out and political staffers left in their home states.

Just the politicians and their essential aides have travelled to Canberra for the Parliament to meet.

Coronavirus restrictions mean there are limits on the number of politicians that can enter the chambers. It means rosters now dictate whether a politician needs to respond to bells and flashing lights.

So here sits Chesters, alone, nursing her nine-month-old daughter Daisy with work briefing notes close by. She won't have to go into the green chamber until she's back on the roster tomorrow.

Much of this morning would have been unimaginable little more than a year earlier.

Today, Chesters finds herself in a group of female Labor politicians doing their jobs while pregnant or caring for newborn babies in the middle of a deadly global pandemic.

Like Chesters, Amanda Rishworth has also given birth since the election. Canberra MP Alicia Payne gave birth to a daughter this week and another four babies, including twins, are due in the coming months.

United in their experience, the mothers are seeking to modernise federal political life in the hope they can blaze a trail for others to follow behind them.

"We have got to the stage in our pre-selection where we are now pre-selecting women," Chesters says.

"There are going to be babies."

Click here to read the full article published by ABC News on 20 September 2020.