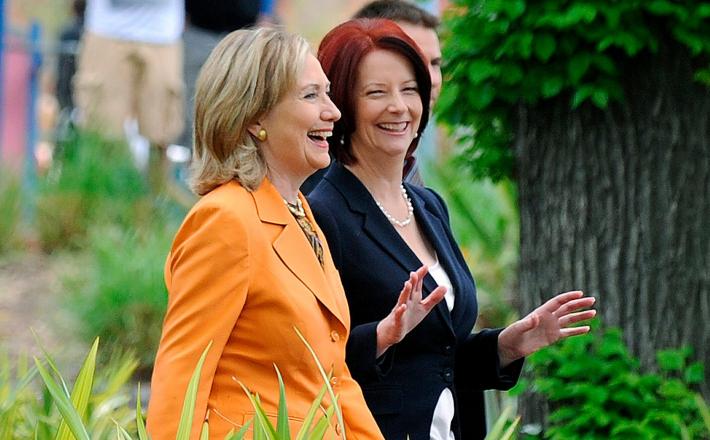 The Guardian has published an article on the support that former Australian prime minister Julia Gillard is giving to Hillary Clinton. She has urged Americans to call out sexism against the Democratic presidential nominee, Hillary Clinton.

Gillard touches on her own experiences in a piece for the New York Times after attending a forum on women in leadership at the Democratic national convention.

She writes of being branded a witch and a bitch in posters during an anti-carbon tax rally and a call by broadcaster Alan Jones for her to be put in a chaff bag and dumped at sea.

“I have often reflected how powerful it would have been if, at that moment, a male business leader, especially one who opposed my policies, said, ‘I may not support the prime minister politically, but Australia must not conduct its democratic debates this way,’ ” Gillard writes. “Unfortunately, that never happened.”

She writes about being asked what advice she has for Clinton as she seeks to become the first female leader of the US.

“I’m not egotistical enough to think that the most qualified and prepared presidential candidate the United States has ever seen needs my advice on policy,” she writes.

But not even Clinton was immune to what Gillard called “the curious question of gender”.

“She knows what it’s like to be the subject of the stereotype that a powerful woman cannot be likeable; that if she is commanding then she must be incapable of empathy.”

Many young women hoping for political careers were counting on such sexism to be rebuffed, Gillard writes.

“Mrs Clinton should not have to deal with this alone. Every Democrat, every Republican, every person who believes that women and men are equal should call out any sexism.”