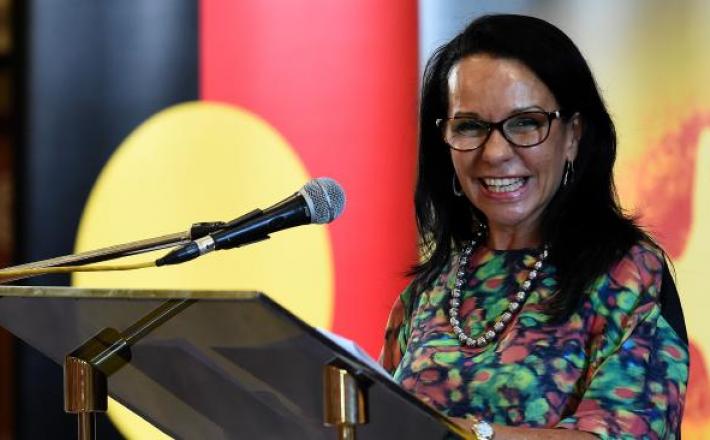 The first Aboriginal woman elected to Australia's lower house of parliament has promised to bring the "fighting spirit of her clan" to political life.

In her maiden speech, Linda Burney wore a traditional kangaroo-skin cloak with her personal totem, the white cockatoo, known as the noisy messenger bird.

She lambasted calls for the Racial Discrimination Act to be watered down.

Usual protocol in the House of Representatives in Canberra was relaxed to allow a woman from Ms Burney's Wiradjuri clan to sing a welcome from the public gallery.

Referring to her people, she promised to bring the Wiradjuri fighting spirit into federal parliament.

"I was born at a time when the Australian government knew how how many sheep there were but not how many Aboriginal people," the former schoolteacher told the House.

"I was 10 years old before the '67 referendum fixed that. The first decade of my life was spent as a non-citizen."

She said that calls by some senators to amend the Racial Discrimination Act showed a lack of sincerity that was "hurtful".

Ms Burney is the daughter of a white mother and an Aboriginal father. She did not meet her father until she was 28 years old.

Ms Burney made history in 2003 when she became the first indigenous MP elected to the parliament of New South Wales, Australia's most populous state.

She said at the time that she hoped her election was part of a trend towards greater inclusion in Australian political life. Access here the source of the article.