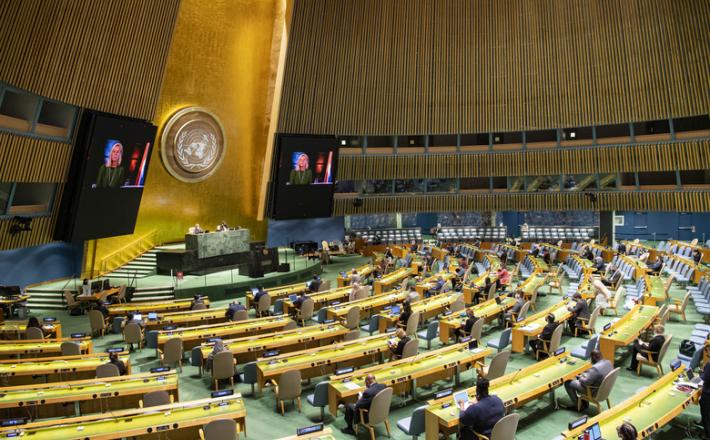 Twenty‑five years after the landmark Fourth World Conference on Women, global societies need an unqualified push to meet the elusive promise of gender equality that had brought millions to Beijing in 1995 to demand action, Secretary‑General António Guterres told a High‑level General Assembly meeting to review progress.

“It starts with the equal representation of women in leadership positions — in Governments, boardrooms, in climate negotiations and at the peace table — everywhere decisions are taken that affect people’s lives,” he said. “This is fundamentally a question of power.”

Fulfilling the ambitious vision outlined in the Beijing Declaration and Platform for Action — adopted at the Conference — will require targeted measures, he said. One woman in three still experiences violence in her lifetime. Every year, 12 million girls marry before the age of 18. In 2017, 137 women were killed daily by a family member. The World Bank estimates it could take 150 years to achieve gender parity in lifetime earned income — and that closing that gap would generate $172 trillion in human capital wealth.

To be sure, the Beijing Declaration spurred 274 legal and regulatory reforms in 131 countries, said Phumzile Mlambo-Ngcuka, Executive Director of the United Nations Entity for Gender Equality and the Empowerment of Women (UN‑Women). At the founding of the United Nations in 1945, there were no women Heads of State or Government. In 1995, there were 12 — and today, there are 22. “All in all, progress, but not yet enough, and too slow,” she said. Parity is needed in all spheres — including cabinets, corporate boards and throughout the economy. “We need big bold steps,” she said, warning those gathered that modest gains made since 1995 are under threat.

Click here to read the full article published by Relief Web on 2 October 2020.