Marina Silva, the Afro-Brazilian environment activist that could take over another female president. 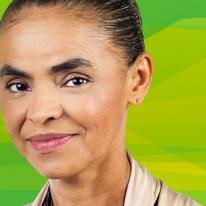 Marina Silva is a female political activist from Brazil who has been involved in the fight to protect our planet since the age of twenty five. She is a fierce opponent of the actual Brazilian president, Dilma Roussef, and there is good hope that Marine Silva could win against her rival.

Silva comes from a family of 11 children, and started school at age 16. She joined Rio Branco, after both her parents died, where she received a Catholic education. She graduated in History at the federal university of Acre at 26, and became more and more involved in politics.

Since 1986, her fight has focused on ecology: she has organized marches to make people aware of the deforestation issue. She also joined the Labour Party. Her commitment was rewarded in 2003 when Lula became president and he trusted her to make her the head of the Ministry of Ecology. From 2003 to 2008, she contributed to a 60% decrease in deforestation. She also participated with the police in removing groups of illegal wood sellers.

She resigned from the government, and left the Labour party for the Green Party in 2008. She ran for presidency in 2010, and gathered 19% of votes which is amazing considering how small the party was, and its lack of funds. She then created her own party but failed to gather enough signatures to validate the creation of the party. She joined Eduardo Campos at the Brazilian Socialist Party. His sudden death in the plane crash made her the official candidate of the BSP. This puts Dilma Roussef in a quite awkward position.

Dilma Roussef has to endure the consequences of Brazil being the host country of the last world cup. The organization of the event triggered protests and many violent marches for the Brazilian people were upset by the amount of money spent to create football stadiums and accommodations for the world best teams, when 22% of the Brazilians live under poverty. Marina Silva appears to be a positive alternative to Roussef’s politics. She is the first Afro-Brazilian woman that has the potential to succeed and become president. Fingers crossed that her tenacity will be rewarded for her commitment knows no bounds.