The latest French government, a government with an equal number of male and female ministers 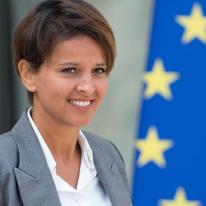 The latest French government, a government with an equal number of male and female ministers by Lucile Huguet, iKNOW Politics writer (Photo: NIVIERE/SIPA)

France will still have to wait to see a woman leading the country, but after the emergence of “political rebels” among the government and their growing number, President François Hollande and his Prime Minister Manuel Valls, hurried to shut them up by dissolving the government and creating a new one.

A new cabinet was presented on Tuesday to save France’s economic situation, one that is more Social-Liberal than ever. This new team consists of 16 ministers: 8 women and 8 men. Some of the female ministers were already members of the first government (known as Valls I) and even kept their positions: Ségolène Royal as Minister of Ecology, Christine Taubira as Minister of Justice, Marisol Touraine as Minister of Public Health and Women Rights, Sylvia Pinel as Minister of Housing and George Pau-Langevin as Minister of Overseas Territories. What seems to be happening is a reshuffle, one that looks like the game known as musical chairs and played by ministers under the complicity of François Hollande.

Although already present in the “Valls I” government, the winners are: Fleur Pellerin now in charge of the Ministry of Culture and Najat Vallaud-Belkacem who continues to rise and shine under the presidency of François Hollande.

Fleur Pellerin was born in Seoul in 1973 and is the first cabinet member of Asian descent in the French government. Jean-Marc Ayrault, first Prime Minister under President Hollande, appointed her Minister Delegate with responsibility for Small and Medium Enterprises, Innovation, and the Digital Economy attached to the Minister for Economic Regeneration from 2012 to 2014. She was then appointed Secretary of State for Exportations and Foreign Trade, Tourism Development and French people abroad in the first Manual Valls government in April 2014.

Najat Vallaud-Belkacem, 36 years old, is from Morocco, and started her political career as the spokesperson of Ségolène Royal's campaign during the 2007 French presidential election and again in 2009 for the 2011 French Socialist Party presidential primary. She was later appointed to French President François Hollande's cabinet as Minister of Women's Rights and spokeswoman for the government. On the 26th of August 2014, she became the first woman in the history of the French Republic to be appointed Minister of Education.

I hope these two brilliant, young and dynamic women will manage to give a new kick to a government that seems to be dragging its feet.