Ray of hope for women in Indian politics 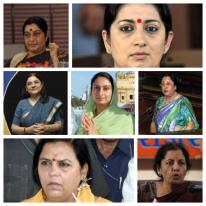 By Aarushi Koundal, India being the largest democracy of the world went through one of its most talked about elections few months back. The country saw the downfall of the incumbents from the political arena. Proving all the political priests wrong, Bhartiya Janta Party of the NDA achieved an absolute majority. Though India has never been that forward when it comes to the political participation of women, this year, under the leadership of Prime Minister Narendra Modi, the newly sworn-in cabinet has appointed seven women ministers - six of them with cabinet rank - a first in the history of India. With the total cabinet consisting of 23 ministers, women make 25% of it, the highest percentage of government representation to date. The female members of the cabinet include veterans like Sushma Swaraj and Najma Heptulla on one side along with relatively young women like Smriti Irani and Harsimrat Kaur Badal. In the former UPA government, there were only 7 women out of 71 ministers and just two held cabinet rank.

According to the available data for 2014 by the Geneva based Inter-Parliamentary Union (IPU), India’s neighboring countries such Pakistan has 67 women in a house of 323 (20.7 percent), Bangladesh has 67 out of 347 (19.3 percent) while Nepal has 172 out of 575 (29.9 percent) And with countries like France which have reached the mark of equal women representation in government, India still has a long way to go. But with the increase in the current number of women representatives in the cabinet, one should see this as a huge landmark which can give way for further increase in the political representation of women.

India has been an independent nation for nearly 67 years but it is still struggling with a misogynistic approach towards women which is preventing them from entering and impacting politics. India really is moving with a slow pace in this issue, so what are the reasons behind such an old mindset towards women? The reasons behind the condition of women in politics are numerous and deep rooted. The problem starts even before birth, the unbalanced sex ratio because of female feticides. Apart from cultural reasons another perpetuator of women’s limited political participation is the high number of women who are financially dependent on their husbands or other male members of the family. As a result of this social and cultural discrimination against women, right from childhood, they lack behind in education which majorly contributes to their dependency on others. Like the famous quote goes ‘if you educate a girl, you educate the whole family’, we need realize the potential of  women. We need to get into the crust of the whole matter and self-introspect ourselves first, in order to bring about a change of mindset on a larger scale.

According to a recent paper by Carole Spary, a professor in the UK-based University of York, political parties in India tend to see women as less likely to win elections than men, and therefore prefer not to take risks with seats which they could easily win. And this actually happens to be the major factor behind fewer women being given the candidature for seats in every national or regional party.

After looking at these various socio-cultural barriers that women go through we should try to figure out some steps to tackle these issues for a speedy increase in the political representation of women. We cannot look beyond such discrimination until and unless we begin the reconstruction the archaic  socitalperceptions of women. This can be done by promoting counter ideologies and reinterpretation of religious and historical texts for defining a better place for women in the contemporary world. Along with these, deconstruction of existing patriarchal notions and educating males about the importance of females in a society is essential. If all these steps are put in action then the position of women in society can be improved resulting a stronger representation of women in politics.

As analysts and experts say women’s representation in parliament is highly imperative not only for of social justice, equality and legitimacy of the political system, but also because the rise in the number of women in public offices having power, making decisions and impacting interests will lead to a better awareness of women in society and will thus strike at the roots of gender hierarchy in public life as well. Women’s participation should be encouraged in the decision-making bodies because only women representatives can bring in the required laws and amendments for the development, freedom and security of other women across the nation.

The Women’s Reservation Bill (Quota) which proposes to reserve a third of the seats in the lower house and in all legislative assemblies for women could prove to be a powerful tool of women’s empowerment. This proposed Bill has already been accepted by the upper house in 2010 and now awaits approval from the lower house. And with the newly appointed cabinet with the most number of women till now, there is  hope that this Bill might soon be passd. This will prove to be a crucial step towards the necessary electoral and parliamentary reforms which will eventually help in correcting the gender imbalance in politics.