Feminism, Facebook and Fake News: The case for women’s political engagement in 2016 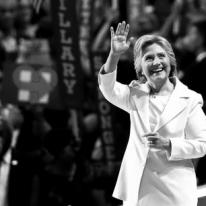 Every generation blames the one before. Or so sang Mike and the Mechanics. When I was studying feminism in the 1990s, I remember thinking my brand of feminism was very different to that of my predecessors – those grand-old second wave feminists of the 1970s who were vocal, marched, and fought. Hard. My feminism, I wrote in my final “Gender, Power and Politics” essay, was personal. Yes, I believed in equality between men and women. Yes, I believed women should play a role in public life, as political leaders, as company chiefs. But I would practice feminism through personal influence. Through incessant, unrelenting arguments, I would convince my friends and family – anyone who cared to listen, really – of the importance of women’s political empowerment. I didn’t need to march. I didn’t need to write to my local politician. I didn’t need to join a political party. I just needed to win the argument.

Now into my forties (obvious, perhaps, from the song reference), I feel like I’ve already become part of an older generation. A new group of young women are challenging what it means to be a feminist. Like the generation before, they too want to redefine feminism. Not just what it means, but how it’s practiced. While the need for equality between men and women is a view more fervently than it used to be, we know that young women are generally more reluctant to call themselves ‘feminist’. We also know that young women’s ‘feminist’ activism has yet again taken on a different form. It’s online. It’s on Facebook. It’s on Twitter.  Hashtags apparently define the way we talk about contemporary feminism.

Here’s the thing: for all its empowerment of girls, we also know that ‘Facebook feminism’ didn’t translate into women’s political leadership in the 2016 US Presidential Election. Online, young people may have ‘voted’ for Hillary Clinton (according to a pre-election day SurveyMonkey poll). In reality, voter turnout rates show that roughly 40 per cent of the eligible American population did not use a pencil to mark a ballot paper on Election Day. Robert Alexander, a political science professor at Ohio Northern University, says that Clinton’s Democratic base just did not show up. “People didn’t see that urgency. The people that did support her, did not see her losing.” Pew Centre research shows that while the 18 to 29 year old demographic came out in support for Obama (in both 2008 and 2012) fewer of them did so for Clinton in 2016.

In her piece on young women’s rejection of Hillary Clinton and her ‘brand of feminism’, Hanna Kozlowska argues that Clinton’s candidacy brought with it “an intergenerational feminist schism.” Young women didn’t need to vote for Clinton to define themselves as feminists. More to the point, young women didn’t see in Clinton a reflection of their own idea of modern feminism:

… as far as they’re concerned, Clinton stands at the apex of the establishment pyramid, one that is entrenched in the power politics of Washington, far removed from the average young American. She’s just another politician, and that class as a whole should not be trusted.

The idea that Hillary Clinton was ‘too much a part of the political establishment’ is as ridiculous as it is meaningless. Of course Clinton was a part of the political establishment. You don’t get to be the first woman Presidential nominee of a major political party without being a part of the system. In fact, you have to work the system. Years of research into women’s political empowerment show that political parties are the great gatekeepers of our liberal democracies. Women constantly need to fight their way up through their parties to be nominated. And clearly, the fight is not easy – evidenced in the fact that in 2017, worldwide, women still represent less than a quarter of the world’s national parliamentarians. Fewer still are presidents or prime ministers.

Which raises the question of fake news. If we have become so disenchanted with liberal democracy, some of the responsibility lies in our understanding of, and engagement with, our representative institutions. If we cannot interact with it critically, democracy will not reward us. And so we need to be better equipped. We need reliable, ethical sources of information. We need to know how the political system works. We need to know the entry points for individual influence in the system.

Fake news, at its base manifestation, disempowers our community. It fuels distrust. It creates resentment. It misdirects blame. In February 2017, the Speaker of the Italian Chamber of Deputies Laura Boldrini, launched a campaign against ‘disinformation’, noting:

The most worrying aspect is that fake news, whether it’s driven by profit or as political propaganda, is all too often an antechamber to hate. It is the combination of fake news that targets adversaries, and the hate this enables, that risks short-circuiting our democracies. It not only pollutes the debate, but it may also distort how consensus is built.

We need to better understand our political world, to become more active participants. And here I make a plea to all feminists, young and old(er): we can no longer continue to take for granted the gender equality milestones achieved by our predecessors. Nonchalance, and inactivity, will lead to their loss.

Feminism is not a cause of the past. While some predicted its demise in 2016, the year really served to showcase how much we still have to fight for; how far we still have to go. Across the world, women are still not seen as legitimate, credible actors in the political sphere. The women who have made it, are subjected on a daily basis to degrading, sexualised and violent abuse, both online and in person.

Social media might give women platforms and communities to discuss their concerns, but there also has to be formal engagement. We all need to continue the marches, we need to call our politicians, we need to write informed, well-researched submissions to committee inquiries, we need to initiate petitions that generate the support of thousands, we need to join political parties, we need to form politicalassociations, we need to vote, and we need to run for office.