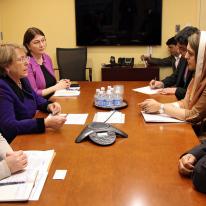 Growing up in the capital city and the political hot seat of the world’s youngest democracy, I wish I could talk about my experience in a liberal society, a life of equal opportunities and of meeting women empowered to do something simple, be themselves. But this is easier said than done - Because I don’t have such an experience; because I don’t know such a society.

On the one hand, I hear of women such as Chanda Kochhar and Shikha Sharma and Indra Nooyi, making it to the Fortune500 and Forbes lists. And on the other hand, I hear news of women silently succumbing to their immolation following their husband’s death. I live in a society where 8-year old girls are married to 50-year old men, molested and finally, sold. In this society, like in many others, women aren’t equals. Women aren’t people. They are an inferior species, deserving of objectification and are a medium of earning a few rupees.

Maybe I’m being a little harsh in my description. So I’ll talk about the situation in the ‘educated’ upper-middle and higher classes. Here, women are given the chance to study. They choose their passion, their hobbies, their subjects and their career path. They are taught to work hard, for top colleges, top grad schools and the top MNCs. They are taught dedication, perseverance and courage. They are made to develop an iron-will. This is the society that I grew up in. Yet, even in my society, only, roughly 15% of women get to live this “good life”. What happens to the rest? The ‘educated’ society tells them, - “Nobody wants to marry such a smart woman.” “Don’t study too much or you won’t find yourself a good match.” “You can’t just focus on your career.” “You must marry before you’re 27”. Then these women are married, often when they don’t feel ready, expected to cook three meals a day, take care of their children, hold two families together, manage their career, and finally “revere” their not-always-multitasking-husbands like some reincarnation of the Almighty himself.

What makes these women accept this lesser life? What makes them settle for something so obviously less than what they deserve? What makes a Harvard graduate give up that once-in-a-lifetime opportunity at a New York Law firm and come back to her home country, get married and work a run-of-the-mill job(if at all she is allowed a career)? The answer is not lack of education. It isn’t even lack of money, or opportunities, or any resources. The answer is in the societal tuning. The pressure to fit into a society which may be fast evolving and “modernizing” itself but continues with one foot stuck in orthodoxy and a patriarchal set-up. Women in such a society fall prey to a mindset which they never evolved. It was always engraved. They watched their mothers and grandmothers make sacrifices and silently, these sacrifices turned into choices - manufactured consent. Educated girls thought they were making a choice, to keep the family happy, but they were actually settling for less. They were wondering why their brothers didn’t have to keep the parents happy but they never were taught to argue, assert or demand. As a woman, I shudder at the thought of the outcome if this society perseveres. I shudder at the deep rooted problem of women continuing to be ridiculed, deprived and taken too lightly.

The solution? Social restructuring. A new mindset, a new point of view and a high tide of new opinions. This means more public discourse, reaching out to the most ignored parts of the society and increased engagement of all walks of life. In a nutshell, evolution in Politics. Politics needs to save women from the bottomless pit of sacrifices and guilt that they have accepted as a fault of their chromosomes. Politics also needs to save women from a society that shuns rape victims, considers it the “duty” of a woman to obey her husband and considers a smart woman, a threat to their established chain of ridiculous power. Nothing has as much capacity to affect an entire country as either a disease epidemic or a national leader. I go forward with this article, putting my faith in the latter.

Politics, in a country, should be a delicacy of representation, sensitivity, and an understanding of positive change. Politics, should be able to echo the muffled voices of the nation and frame policies that can truly bring all people of the country on an equal pedestal. As a citizen, I should be able to put my faith in the country’s leaders and trust that they will understand, respect and execute my needs.

This brings me to my argument for increased women’s participation in national politics and global decision making.

First, women know what it means to be deprived of well-deserved opportunities and women understand the potential of hitherto muffled voices. Understanding leads to empathy, which in turn leads to a stronger desire for change. It is crucial to involve this understanding into the policy framework to identify with and engage the deprived groups of a country’s population. No country, no state and no generation can claim to have truly progressed unless the poorest, the weakest and the most ignored sections of society have taken a step forward. That is what politics need to strive for - progress on the path of social development and a better standard of living of the populace. Some might argue that there may as well be more men to participate in politics who would also understand these needs. Yet, in patriarchal societies, men have not been through centuries of baseless discrimination, men have not been called the weaker sex and no deprived woman will relate to a politically powerful man. So, for any country to truly move forward in the political arena by making it more inclusive; and towards an improved decision-making platform, it is imperative to engage more women – talented, understanding and of great potential.

When one woman comes to the fore, it will create a ripple effect and touch the lives of many, many more women. If even four out of ten women can imagine themselves as this woman and begin to assert themselves; if they can start following their dreams, then change is inevitable. Evolution will begin and a new society will be born, for all to appreciate.

Second, women have what it takes to be strong leaders, game changers and great revolutionaries. From Cleopatra, to Queen Victoria, Aung San Suu Kyi, Mother Teresa, and today’s Malala Yousafzai, through the centuries, the world has seen strong women bring the world to order, single-handedly. A determined woman, with an iron will, can easily drive the nation towards solidarity, austerity, peace and growth. She is well equipped with the qualities this world needs, to ensure representation, justice and personal independence – she has passion, sympathy, courage and the will to influence meaningful change. History disproves what the “man-is-strong” perception is trying to glorify – Women are just as strong and capable to make the rules.

So if women have the potential and the world still finds it difficult to name ten powerful women politicians, then something is amiss. This “something”, the vacuum, needs to be plugged with sensitivity and empowerment to let a woman’s voice be heard; to let a woman’s life be valued and to let every woman understand that she is equal, if not better than any man she crosses paths with.

Lastly, I’d like to talk about what harms will accrue if the fairer sex continues to be under-represented in the global political scenario. The society will continue to be stuck in a rut. With a few exceptions, the perception that “A woman’s decisions are best suited for her home” will unfortunately become embalmed in the minds of future generations too. The massive potential of women will remain passive and from time to time, a capable top-notch global leader will end up in the confined outreach of her walled house in a weak society. When a woman is ridiculed by her family, silenced by the society or deprived of basic human rights, more than one life is at stake. What is visible, is the quiet of the woman. But what is not visible is the way her daughter accepts the same fate, her son accepts the patriarchy and her husband accepts his “supremacy”.

If more women aren’t allowed to engage in Politics and become representatives of the victims of this barbaric society, the social structure will break down. All we need may be one flame to spark a revolution but if this flame fails to light up, the darkness may well consume all potential and power of the woman. Women need to be engaged in Politics, not just for themselves, but also for the men. For the sons and brothers and husbands. When the spirit of a woman dies, the very essence of the society is dying and it is this spirit that needs to find its voice in the political system, to be able to bring about change that matters.

Since time immemorial, economies are developing, GDPs are growing, dictators are being brought to the bar but women are still lagging behind. The social structure is still in a rut. Women are accepting discrimination as something they deserve because this discrimination is being carefully disguised as tradition and “family-values”. Politics today is becoming about global mud-slinging, invasions, impositions and financial supremacy. National politics has become crony capitalism, power wars and vote bank pleasing. A girl is raped and hanged to die and politicians blame globalization. Trade, budget surplus and nuclear power are becoming more important than the citizens. People’s leaders are buying coffins in gold while the people are dying of cold, hunger, homelessness and dowry demands.