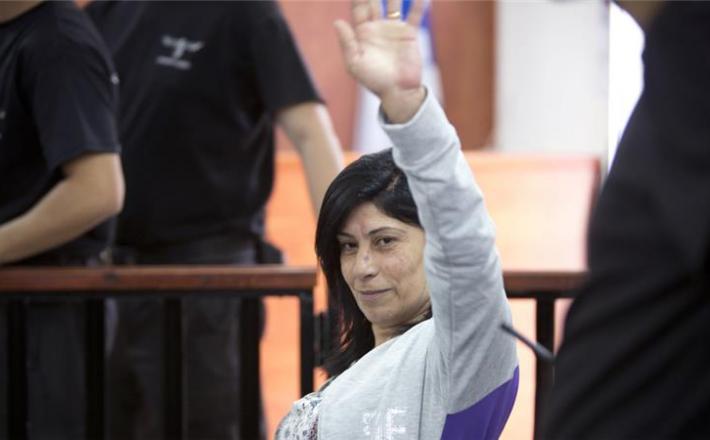 The morning after Palestinian parliamentarian Khalida Jarrar, 53, was released after 15 months in Israeli prison, she had an important meeting to attend.

The Palestinian Legislative Council (PLC) was meeting to discuss a number of laws, and Jarrar refused to miss it, even though her months in detention had taken a toll.

The left-wing parliamentarian, feminist and advocate of prisoners' rights never thought she would lead such a public life, but even as a child, she could always see the broken bits of society - from living under the Israeli occupation to gender inequality - and desperately wanted to play a role in fixing them.

"It all happened gradually ... Things in my political career and my activism just kind of flowed to this point," Jarrar told Al Jazeera, just days after her release last month. Exhausted, she lit a cigarette as she sat barefoot in her family's living room in central Ramallah.

"I have meetings all day today," she said. "This morning has been the only time I've had to myself since I was released."

Clad in a red T-shirt with the slogan "We will die, but we will not bow", Jarrar said she began pushing back against gender stereotypes through her activism in the occupied West Bank when she was only 13.

As a young teen, Jarrar started working with a volunteer group in Nablus that focused on cleaning up the community, building city gardens and improving the learning spaces at public schools. Most of her family did not support her, arguing such work was more suited for boys: "My mother supported me back then, but my dad and most of my other family members thought it was inappropriate."

But Jarrar persisted, and over the years she became a strong advocate for social change, leading to multiple run-ins with Israeli authorities. In April 2015, Israel arrested Jarrar and initially held her under administrative detention without charge. Facing international pressure to charge or release Jarrar, an Israeli military court ultimately brought her up on 12 charges related to her political work as an elected member of the PLC.

Despite an international outcry, Jarrar was found guilty and sentenced to 15 months in Israeli prison, five years of probation and a fine of $2,600.

"I think what happened in the court was a shame," Jarrar said. "The charges against me were related to me going to demonstrations in support of Palestinian political prisoners. I was visiting prisoners and visiting student events in universities, a normal thing for a legislator. In the end it was a military court, and the procedures of justice in these kinds of courts - while we are under occupation - just isn't justice.

On June 3, Jarrar was released a month early, allegedly because the prison was overcrowded.

Even in prison, Jarrar continued to push for change. She taught English to other prisoners, including 12-year-old Dima al-Wawi, thought to be the youngest female Palestinian ever held in Israeli prison.

Jarrar also began collecting stories from other women about how and why they ended up behind Israeli bars.

"I wanted to [understand] why so many of these young women were going to checkpoints with knives or less than that, and getting arrested or killed in such a way for, many times, nothing at all," Jarrar said.

In many recent cases, she said, Israel arrested innocent women who had no intention of carrying out stabbing attacks. In cases in which Palestinian women and girls were actually carrying knives at Israeli checkpoints, Jarrar believes the reasons were related to "social issues that we need to change". She did not expand, but it has previously been speculated that some young women caught carrying knives were deliberately attempting to be arrested, or even killed, in order to escape problems at home.

Between 2013 and 2015, a 70 percent increase in female Palestinian prisoners held by Israel was documented, though the reasons for this increase remain unclear.

Jarrar's work in the early days of Palestine's fledgling feminist movement began in the 1980s at Birzeit University, where she studied business administration with a goal to empower female entrepreneurs. It was here that she began working with student feminist groups who were determined to break through in a male-dominated world.

"In university, my activism mostly focused on women's issues ... Myself and other women from my university were working to demand equality for women and to end violence against women," Jarrar said.

After completing her degree, Jarrar landed her dream job at the time: working with a Norwegian NGO that helped Palestinian women become entrepreneurs, teaching them how to sell home-grown vegetables, traditional crafts and other hand-made products. Although the Palestinian women's movement in the 1980s was stronger and more forward-thinking than the movement today, Jarrar said, she believes another shift is on the way.

"To be honest, we have gone backwards in many ways," she said. "Since I started my work for gender equality, I have watched this conservatism kind of start to take over, and that has been bad for women. We were much more forward 30 years ago for women's rights, but I can say that now I'm starting to see a bit of change. Many women's movements are turning up that are talking about equality and working to change and to develop our internal Palestinian laws to be adapted for women, so that is a good sign."

While Palestinian laws on labour and political participation meet international standards, women's rights activists still have much work to do on family and criminal legislation, which fall short of those standards, according to the United Nations.

As Jarrar was pursuing her Master's degree in human rights and democracy at Birzeit, she was arrested by Israeli forces for the first time on March 8, 1989, during an International Women's Day protest, simply for being present.

She spent a month in Israeli jail and came out promoting another social cause: prisoners' rights. Jarrar went on to become the director of Addameer, a Palestinian prisoners' rights group based in the occupied West Bank.

In 2006, she was elected as a representative of the PLC and later headed the council's prisoners' committee. In her role with the PLC, Jarrar has rallied for gender equality, prisoners' rights and a return to the democratic process within the Palestinian Authority, which has failed to hold elections for more than a decade.

She led the movement to bring the Israeli government to the International Criminal Court, represents Palestine on the Council of Europe, and serves as an acting board member with Addameer - and she has no plans to slow down, even if that means risking another stint in prison.

"I'm a parliamentarian elected by my people, so I will continue my work. There are many laws that we have to work on and a lot of things that need to be done to help our people," Jarrar said passionately. "I've already started working with other parliamentarians on this social security law that was passed while I was imprisoned."

Palestinian President Mahmoud Abbas signed the controversial new law in March, spurring a backlash from protesters who say it violates basic workers' rights and was passed without proper debate.

"I'm working to adjust the language [in the law] to empower poor people to have equality, and change the way the law was written when it was approved by the president," she said.

Compromise is not on the agenda for Jarrar, who speaks of democracy, the ICC, ending the occupation, gender equality, prison reform, and a slew of other issues with the same fiery determination.

"There is a lot of work to be done now that I am free, and I will continue my work as a legislator," she said. "So if Israel wants to arrest me for this work, they can come and arrest me." Click here to access the original content.