Member of Parliament in Malawi 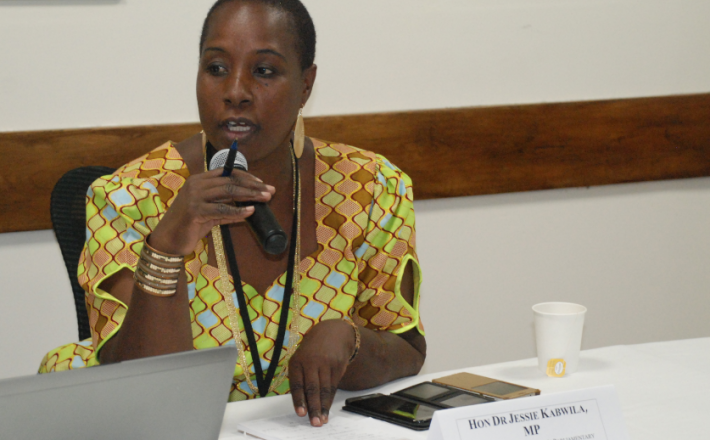 Hon. Dr. Jessie Kabwila is a politician, academic, and feminist. Member of Parliament in Malawi, she is currently the Chairperson of the Women Parliamentary Caucus.

iKNOW Politics: In 2014, the incumbent female president Joyce Banda lost the presidency and the number of women parliamentarians went down from 43 to 33 (22.3% to 16.7%). Today, Malawi is ranked 120th worldwide when it comes to women’s representation in Parliament. How do you explain this decline in women’s political representation and the lack of women’s engagement in Malawian politics?

Hon. Dr. Jessie Kabwila: In many ways, Malawi is suffering a backlash of having a woman become president. The challenges that Joyce Banda met are usually exacted on all women who want to be leaders, especially leaders in the political arena. The lack of women’s engagement is mostly caused by the discrimination that women face due to patriarchy in Malawi, at religion and indigenous cultural levels. In addition, politics is a very expensive career that favours the well-educated, this is something elusive to most women in Malawi, majority of the poor, those told they are born to be married, compliment men and not be leaders. The patriarchal culture discourages women from careers that keep a woman out of the house for long, often travelling, holding meetings and debating usually way into the night, and constructing power to attain strong political positions in parties.

Although there is no legislated quota, the Malawi Congress Party (MCP), the party you represent, aims to allocate 33% of the seats to women at all levels of the party structure. Additionally, according to the party Manifesto, MCP will "ensure that women occupy 30% or more of all decision, policy and managerial positions in the government". How much has been achieved in regards to these commitments? Has there been any resistance to implement these measures?

Like many parties, MCP says that it wants to attain women’s empowerment in politics but MCP needs to spell out exactly how it will attain this thirty percent, especially in its structures, at rural, urban and periurban levels. It also needs to outline at policy and implementation levels, clear ways on how it plans to increase women’s presence in leadership positions, in line with the Gender Equality Act, CEDAW and gender protocol. MCP must look at the structure of the party, see how the women’s wing is structured to be the kitchen of the party, neatly removed from the power track of leadership.

MCP needs to spell out how it plans to fight violence against women in politics that is in the form of verbal, physical and other forms of violence targeting women like me. Throughout the ordeal of experiencing various forms of the state orchestrated violence such as petrol bombing, my political party MCP abandoned me.

Violence against women in politics is also perpetrated within the political parties. For instance, in MCP I have been harassed through a suspension without trail and a disciplinary process that was held by the party without my input. When at the conclusion of the disciplinary process I was found innocent of all the allegations against me, the National Executive Committee (NEC) of the party still pushed to expel me from the party. The NEC of MCP attempted to do this even though this is against the party rules. In order to justify its actions to expel me from the party, NEC’s claim is that the expulsion is valid because I have ambitions to be the party president. As women in politics it is a political “crime” to dare to dream to be the president of a party or a country. Consequently, the patriarchal political system and practices unleash all forms of violence to prevent individual women and women as a group from having ambitions, dreams to be in the highest levels of power and decision making within political parties and public decision making.  In politics women are often reduced to sex objects. MCP needs to come out clear on this. A party that wants to increase women’s representation will be seen by the affirmative action policies it adopts. The questions is does MCP have such policies and processes or not.

MCP in its current form needs an urgent paradigm shift and walk that talk on women’s empowerment. In a democracy, it is not a crime to aspire for leadership and the way a party treats well-educated, high performing women like me, either inspires confidence in other women to join politics or deflates them, some to the point of being afraid to walk the path that I have walked and am still walking.

What do you propose to increase women’s political participation in Malawi? Are there any other political party initiatives besides the MCP and the United Democratic Front’s (UDF) voluntary quotas? What about government and Parliament initiatives? What is the Women Parliamentary Caucus, which you chair, doing in this regard?

You cannot change patriarchy, a structure, without putting a structural change to counter it. MCP and all political parties need an affirmative action tool like the zebra listing or in the least, a 40 -60 gender policy in line with the Gender Equality Act. Political parties in Malawi need to look at sexual and reproductive health and rights and should stop adopting policies and legislation that policies women’s bodies but recognise and treat women as self-determined people who have rights over their bodies and minds. Political parties should not prioritize moralisation over service delivery and a human rights perspective to governance. They should not treat women as first and foremost, child laboratories, and appendages of men. Policies need to be formulated in line with women’s empowerment, linking them to how political women empowerment leads to development and attainment of the SDGs. That should be linked to the identity of the party, made to be an anchor and engine of the party that wants to develop the nation. The party needs to be seen to be working for a national buy in this concept. They should not just speak but act to show that they believe in women’s empowerment in politics and move forward to implement what they have put on paper.