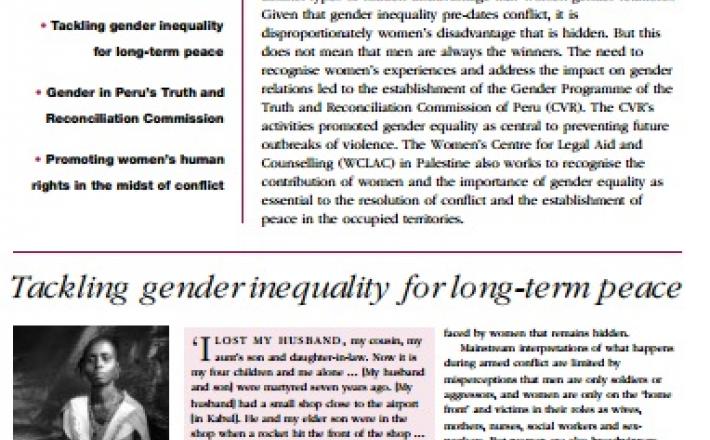 Conventional understandings of war and its aftermath overlook the impact on gender relations. Gender inequality pre-dates and is often exacerbated by conflict. But this does not mean that women are always victims and men only perpetrators. Men also suffer from torture and violence. The diverse roles and needs that arise out of conflict for both women and men, and the consequences this has for gender relations often go unrecognised. The need to recognise women"s experiences and address the impact of war on gender relations led to the establishment of the Gender Programme of the Truth and Reconciliation Commission of Peru (CVR). The CVR"s activities promoted gender equality as central to preventing future outbreaks of violence. The Women"s Centre for Legal Aid and Counselling (WCLAC) in Palestine also works to recognise the contribution of women and the importance of gender equality as essential to the resolution of conflict and the establishment of peace in the occupied territories. This bulletin forms one part of the Cutting Edge Pack on Gender and Armed Conflict, and is available in English, French and Spanish.