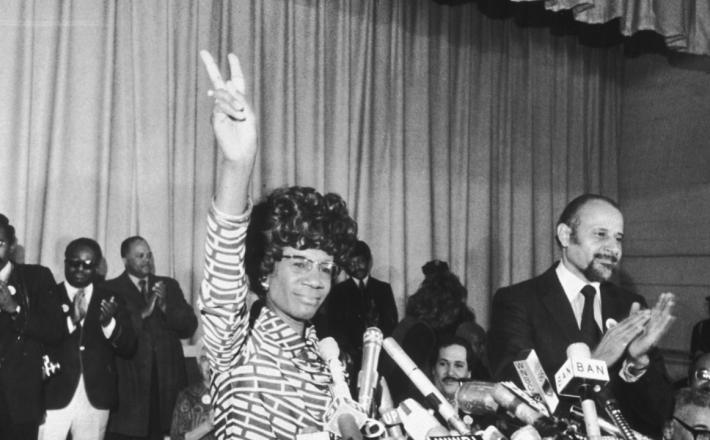 “If they don’t give you a seat at the table, bring in a folding chair.” — Shirley Chisholm

I first learned the name Shirley Chisholm when I was in my 20s. Barack Obama was running for president of the United States and I was interested in learning more about how many Black people had made the decision to run before. Most of the information I found focused on Jesse Jackson, who ran in the 1980s. It took deep digging to find out that there was actually a Black woman who ran over a decade before him. And she did it unapologetically.

Shirley Chisholm was born Shirley Anita St. Hill on November 30, 1924, in Bedford-Stuyvesant, a predominantly Black neighborhood in Brooklyn, New York, where she grew up. Chisholm’s parents were immigrants from Barbados and Guyana, and her heritage reflected the fullness of the Black Diaspora. The oldest of four daughters, Chisholm spent a portion of her childhood in Barbados on her maternal grandparents’ farm receiving a “British education” (as the country wasn’t fully free from British colonization until 1966). Her parents worked through the Great Depression.

When Chisholm returned to the United States, she was a high-performing public school student. She graduated from Brooklyn College in 1946, worked as a nursery school teacher, then obtained a master’s degree at Columbia University Teachers College in 1951. Chisholm was a proud member of Delta Sigma Theta Sorority, Inc., a historically Black organization committed to service and sisterhood, a fact also central to her identity.

Click here to read the full article published by Teen Vogue on 8 February 2018.