Egypt: Position paper by Nazra on the constitutional amendments and women in politics

Egypt: Position paper by Nazra on the constitutional amendments and women in politics 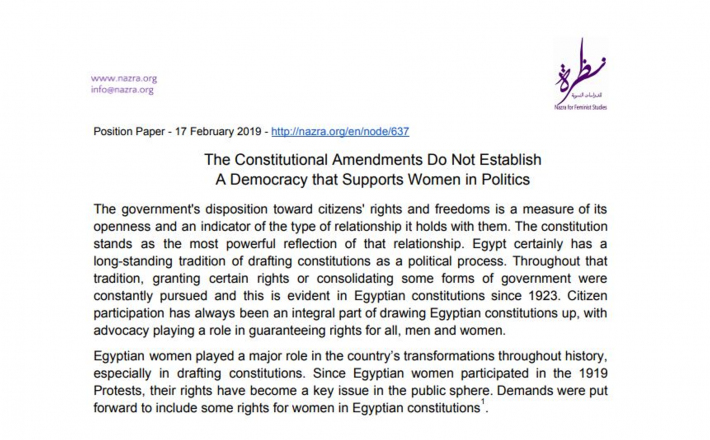 The government's disposition toward citizens' rights and freedoms is a measure of its openness and an indicator of the type of relationship it holds with them. The constitution stands as the most powerful reflection of that relationship. Egypt certainly has a long-standing tradition of drafting constitutions as a political process. Throughout that tradition, granting certain rights or consolidating some forms of government were constantly pursued and this is evident in Egyptian constitutions since 1923. Citizen participation has always been an integral part of drawing Egyptian constitutions up, with advocacy playing a role in guaranteeing rights for all, men and women.

Egyptian women played a major role in the country’s transformations throughout history, especially in drafting constitutions. Since Egyptian women participated in the 1919 Protests, their rights have become a key issue in the public sphere. Demands were put forward to include some rights for women in Egyptian constitutions.

Nazra for Feminist Studies is issuing this paper in February 2019, after the Egyptian Parliament’s general session of February 14, when Parliament referred the Constitutional Amendments Proposal (suggesting amendments to several articles in the 2014 Egyptian constitution) to the Constitutional and Legislative Committee for review. In this paper, we shall discuss the overall state of women’s rights in Egypt in light of the proposed amendments, as we attempt to answer some basic questions: will amendments to the 2014 Constitution benefit women? Do the proposed amendments include more rights for women? Do Egyptian women in 2019 need constitutional amendments that would extend the president’s term, hence detract from the principle of separation of powers and other rights and freedoms (including women’s rights), already guaranteed by the 2014 Constitution? Finally, would raising women’s quotas in Egyptian elected councils be conducive to women’s right to participate in politics or is women’s limited participation attributed to more complex factors?