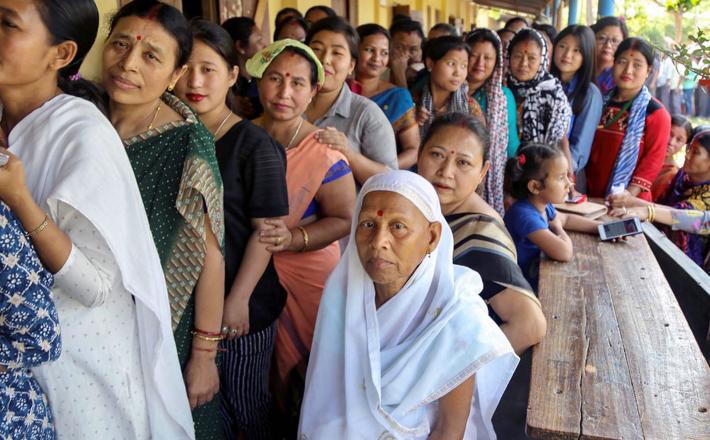 My vote matters’. This is how the Election Commission is exhorting the electorate “in our ageless democracy,” in a poster depicting two tribal women from Sikkim. “The lines on my face do not matter, the ink on my finger does,” it says.

The irony is that the participation of women candidates, especially in the northeastern tribal states, has been negligible. In the 2014 Lok Sabha elections, only two women parliamentarians were elected from the Northeast: Sushmita Dev of the Congress from Silchar and Bijoya Chakraborty of the Bharatiya Janata Party from Guwahati, both non-tribal people from Assam. In Manipur, the capital, Imphal has an Ima Keithel (mothers’ market) run entirely by women. But not a single woman candidate figures in these polls, making the president of Khwairamband Nupi Keithel Semgat Sagat Lup, Radhesana, lament: “Everybody talks of women’s empowerment, yet they have not fielded any woman candidate.” They did have a member of parliament in Kim Gangte way back in 1998, as a Manipur People’s Party candidate. She has been with the Communist Party of India, the MPP, the Trinamul Congress, the BJP and now the National People’s Party, but the party-hopper is not contesting this year. Yet Manipur has 9,90,960 women voters, 51,034 more than the men.

Click here to read the full article published by Telegraph India on 12 April 2019.