Webinar: Gender parity in politics: the state of play

Webinar: Gender parity in politics: the state of play 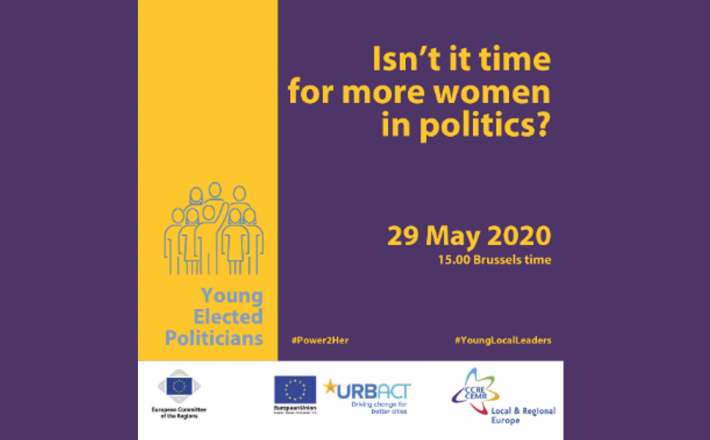 Women remain significantly underrepresented in local decision-making bodies across the EU. They account for only 1/3 of political decision-makers in Europe and around 15% of mayors. Local and regional authorities have a crucial role to play in the achievement of these objectives, as they are key actors to ensure a well-functioning democracy and a more effective policy-making.

In an effort to promote gender equality, the European Commission recently presented the EU Equality Strategy 2020–2025. To contribute to the promotion of gender balance, the European Committee of the Regions adopted the "Strategy for a gender balance in Members' participation in the CoR", aiming at enhancing gender parity in the nomination of CoR Members.

Do you want to know how are regions and cities moving forward gender parity?

Would you like to know how to increase women participation in local and regional politics?

Ms Concha Andreu, CoR Rapporteur of the Opinion "A Union for Equality: Gender Equality Strategy 2020-2025" will participate with a video message on the European Strategy on Gender Equality. Ms Jaimie Just, Policy Advisor on Equality and Diversity at the Council of European Municipalities and Regions, will present the key findings of the study “Women in Politics: Local and European Trends". Ms Sally Kneeshaw, URBACT Programme Expert, will give an overview of the "Gender Equal Cities" initiative and will share best practices for local leaders on how to increase women participation in local politics and on gender-sensitive policy making at city level.