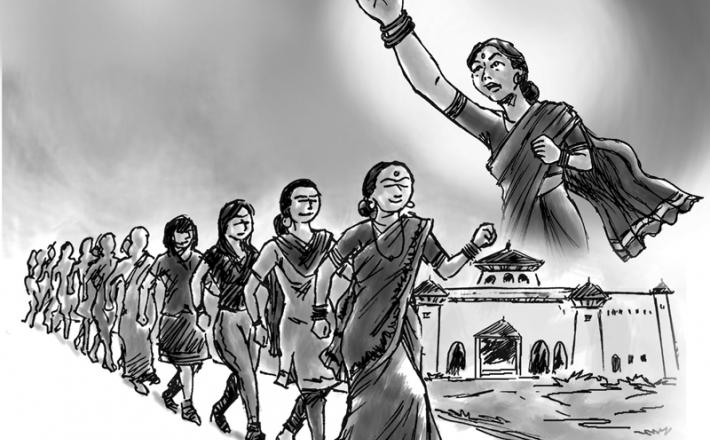 Ten years have passed since Nepal ended its decade-long conflict. These last ten years have been not only an opportunity for Nepal to build and maintain peace, but it’s been a time of reflection and transformation.

One vital reflection is that women and men equally share the responsibility for conflict resolution and peace building.

And since women are often excluded from this role, more must be done to encourage their participation in this important task.

In Nepal and around the world, women are poorly represented informal peacemaking activities, and yet, they often suffer more from war and the effects of conflict.

While international laws on conflict-related sexual violence are advancing, attitudes and behaviour toward women are slow to change.

In 1995, 189 countries including Nepal signed on to the Beijing Platform for Action and agreed to strengthen the participation of women in national reconciliation and reconstruction, and to investigate and punish those who perpetuate violence against women in armed conflict.

The United Nations Security Council resolution 1325 connected women’s security with peace more broadly in 2000 when it placed “women, peace and security” on the international agenda.

There is growing recognition that inclusive societies, which provide equal opportunity for all, are more likely to be peaceful and stable. Inclusion and inclusive development are increasingly seen as core elements of conflict prevention.

UNDP’s work has focused on assisting the various stakeholders – government, members of parliament, political leaders, civil society, youth, women and actors from the marginalized communities – to support them in developing skills and capacity to effectively address inter-group tensions caused by political, resources (both natural and development) and identity-related issues.

UNDP works to develop capacities of women to effectively address tensions in their communities.

In this, UNDP works together with N-Peace, a multi-country network of peace advocates in Asia including Nepal that supports women’s leadership for conflict prevention, resolution and peace building.

Local women leaders have been supported in enhancing their skills on inclusive dialogue, and facilitation between different parties.

This way the local women leaders have become strong advocates for conflict prevention.

Women are often at the frontlines of conflict, but they rarely make the headlines.

The annual N-Peace Awards brings recognition to the often invisible efforts of women who take the lead in building peace and empowering their communities.

This year, the awardee from Nepal is Basanti Chaudary from Kailali, Far Western Nepal.

Ms. Basanti Chaudary represents Kamaiya Pratha Unmulan Samaj, an organization of former kamaiyas, e.g. bonded labourers. The organization strives to empower former kamaiyas to enhance their access and control over resources for better livelihood opportunities, and support them in making changes to their lives.

Though kamaiya and kamlari systems were legally abolished in Nepal in year 2000, the struggle of the former kamaiyas and kamlaris for their justifiable rehabilitation still continues.

Chaudary is described by N-Peace Awards jury as “a symbolic representation of a woman from a traditionally marginalized group, standing up for peace and fighting for the rights of others including violence faced by women”.

This demonstrates the importance of women’s participation in conflict resolution, peace building, and keeping women protected from violence.

Women’s physical security and equality in society are associated with broader peace and stability. When women are safe and secure, they can contribute to a better society.

Further, when they are included in the processes and development agendas at any level, achieving development goals is more likely.

This means ensuring girls’ access to education, including women in government and business, creating violence-free households, workplaces and communities, and providing women with access to justice.

Peace and security cannot be separated from development, if participation and gender equality are to advance in Nepal.

This has been recognized also in the Sustainable Development Goals, which include critical links to women’s empowerment.

Ensuring that women are directly involved in all aspects of country’s development is the key to sustainable peace.