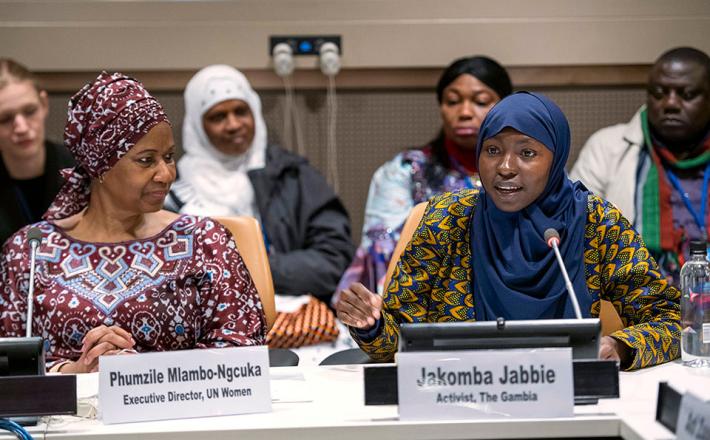 Over 2.5 billion women and girls around the world are affected by discriminatory laws—laws that impede gender equality and hold women and girls back. In too many countries, there are unequal standards for women and men, whether it’s for applying for a passport or in the choice of employment, receiving inheritance and deciding when and whom to marry.

A high-level event on the margins of the 63rd session of the UN Commission on the Status of Women on 20 March, launched the “Equality in Law for Women and Girls by 2030: A Multistakeholder Strategy for Accelerated Action”. The strategy, developed by UN Women, the African Union, Commonwealth, Inter-Parliamentary Union, Organisation Internationale de la Francophonie, Secretaría General Ibero-Americana, and many other UN and NGO partners, seeks to fast-track the repeal or revision of discriminatory laws in 100 countries by 2023.

In her opening remarks, UN Women Executive Director Phumzile Mlambo Ngcuka highlighted how laws are not abstract concepts, they impact every facet of women’s lives. According to The “World Bank’s Women, Business and the Law Index (2019), only six countries around the world give women and men equal legal rights in specific areas of economic empowerment.

“We have made a lot of progress since governments adopted the Beijing Declaration and Platform for Action (1995),” she said, however, . “there are 37 countries where women don’t have the same rights as men when it comes to applying for a passport… 40 per cent of countries have at least one constraint on women’s property rights,” she added.

Announcing the initiative, Ana Maria Menendez, Under-Secretary General to the United Nations, said: “Women and girls must be both beneficiaries and active participants in the design of social protection systems, public services and sustainable infrastructure,” echoing the theme of this year’s CSW. “This can be achieved when laws are gender equal and inclusive of the needs of women. For example, discriminatory land laws which limit women’s ability to own and inherit property prevent them from effectively contributing to food security for their families. This can spiral into malnutrition, higher health cost and lower productivity and income.”

Laws that promote gender equality yield multiple dividends, noted Nabeel Goheer, Assistant Secretary General of the Commonwealth. For instance, a law that enables women to inherit on an equal basis with men, could empower mothers to invest in the education of their daughters. This in turn increases women’s average age of marriage, because girls who stay in school are less likely to be married off.

Jakomba Jabbie, a 16-year-old gender equality activist from The Gambia, spoke from first-hand experience of how laws can make a real difference in women’s and girls’ lives: “In my community, education is deemed unimportant because girls are perceived to be future mothers and who must therefore stay at home and prepare for this role.”

“Gender equality laws are important in supporting girls’ education as they ensure that girls attain the highest level of education and study subjects of their choice. For example, a law which makes child marriage illegal would stop parents and communities from giving their girl children away in marriage… gender equality laws guarantee that girls who become pregnant while in school continue their education upon giving birth. This is because they prevent the practice of pregnant schoolgirls being expelled from school,” she elaborated.

Several panellists also drew attention to the need to change public opinion and mindsets so that cultural change accompanies legal reforms, and more efforts are invested in ensuring women’s participation in the justice sector.

“For the international community to take future action for equality in law it’s also important to reevaluate our cultural views towards women and girls,” said Ambassador Yasuhisa Kawamura, Chargé d'affaires, a.i. of Japan to the United Nations, welcoming the new Strategy. He shared the Abe government’s many efforts to promote women’s economic empowerment and leadership in Japan, which has, among other results, more than doubled the number of female executives in Japan’s largest companies.

Representing the Inter-Parliamentary Union, a key stakeholder of the Equality in Law initiative, Alessandro Motter, Senior Adviser, Office of the Permanent Observer of the IPU to the UN, stressed on the importance of increasing women’s representation in parliaments.

“When you have more women’s representation in parliaments, you have fewer discriminatory laws,” he said.

Women’s representation in political decision-making continues to rise slowly, with slight improvements since 2017, according to the recently released 2019 edition of the biennial IPU-UN Women map of Women in Politics. IPU analysis shows that the global share of women Members of Parliament is 24.3 per cent—an increase of just one point since 2017.

“The elimination of discriminatory laws sends a clear message that women and girls have equal rights,” said Vanessa Ruiz, representing the International Association of Women Judges. “Women judges with their lived experience as women…bring their perspectives to bear so that court decisions are fully informed and avoid discriminatory impact or interpretations,” she added.

“It is extremely important to focus on the implementation of laws,” said Irene Khan, Director-General of International Development Law Organization, emphasizing also on the protection of women in the informal sector, and focusing on customary and informal justice systems. “We need to need to ensure that these legal reforms are supported at the level of communities, because what the law is, is often removed by custom and tradition,” she explained. Narjes Saidane, Ambassador and Permanent Observer to the UN, La Francophonie, noted that in addition to revising and repealing existing discriminatory laws, it’s necessary to prevent the adoption of new laws that are discriminatory towards women and girls. The Equality in Law strategy calls for the immediate repeal of: