This is what leadership looks like: Meet Elena Crasmari, the only woman in her local council in Moldova

This is what leadership looks like: Meet Elena Crasmari, the only woman in her local council in Moldova 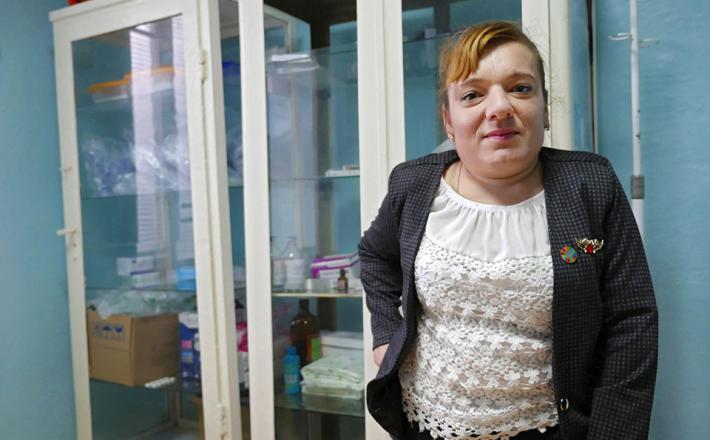 Elena Crasmari decided to run for office so that the local administration could meet the needs of all members of her community. She won a local councillor seat, making her the only woman on a nine-person team, and one of six local councillors with a disability in Moldova, out of 10,472 local councillors.

“I went to the town hall to ask them to help me do something about the stairs of the medical facility,” says Elena Crasmari, 35, after having to get on her hands and knees to enter the building because of her disability. “The mayor handed me a bag of cement and some sand and told me I had to do it myself.”

Elena decided to run for local councillor as an independent candidate in Dolna village, a rural community of 1,155 people about 53km from Moldova’s capital city, Chisinau.

“I decided to run for office to show him that this wasn’t acceptable and that I was a person with full rights, just like him,” she says. “I wanted to take the first step in proving that people with disabilities have a chance.”

“Accessibility is not just about people with disabilities. It is also about elderly people, mothers with children, and other groups,” Crasmari adds.

“People need to know that everyone has equal rights, not only in theory, but also in practice.”

Crasmari started her grassroots campaign to run for the local council, but first needed to collect signatures from at least five percent of registered voters in the community. She gathered all of the necessary signatures in just two days.

Click here to read the full article published by UN Women on 10 March 2021.