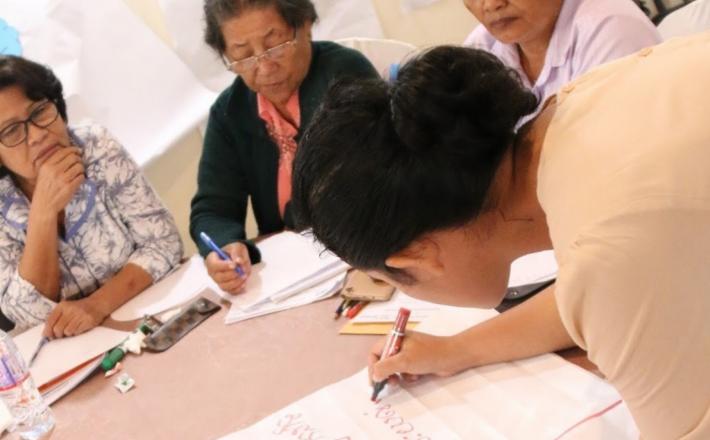 In Cambodia, women continue to be underrepresented in politics. Only three of 29 cabinet ministers are women, and there are no women provincial governors. Women make up just 20 percent of National Assembly members— though a higher proportion than many countries, it is still below the United Nation’s Sustainable Development Goals. At the local level, only 18 percent of commune councilors are women.

Supported by NDI’s four-year Cambodia Democratic Reforms program, SILAKA is preparing party officials to train women candidates for local leadership through a series of trainings. Both the ruling Cambodian People’s Party (CPP) and the opposition Cambodia National Rescue Party (CNRP) pledged to place trained women candidates at the top of their candidate lists in the June 2017 commune council election. For the trainings to be successful, however, representatives from both parties needed to place political differences aside, and focus on the common goal at hand: incorporating skilled female leaders into Cambodia’s politics.

In SILAKA’s first Training of Trainers, facilitators faced significant skepticism from participants. Although the training intended to cover politically neutral facilitation and public speaking skills, representatives from the rival political parties were apprehensive about working together. Members of both the CPP and the CNRP expressed discomfort sharing their experiences, skill sets and strategies while in the same room as their political opponents.

SILAKA trainers recognized this dynamic in the room and quickly clarified the purpose of the training by emphasizing the common purpose of the project. The trainers highlighted the shared goal of both parties to increase women’s participation in politics, specifically in the commune/Sangkat councils. After the dialogue, all 20 participants agreed to learn alongside their opposition counterparts.

The resolution of initial tensions resulted in the rapid development of trainers’ skillsets and confidence. A CNRP member from the Banteay Meas commune council, Kien Svay district, said she was, “so impressed because I have never had confidence speaking in front of people, but after the short self-public speaking in the training and reflection with my presentation clip, I felt more confident and I hope I will be able to deliver everything I learnt to others.”

SILAKA’s effective management of the difficult competitive dynamic between the two parties continued through its second and third Training of Trainers, ensuring each participant was ready to deliver the material to their party’s women candidates.

The master trainers prepared by SILAKA will deliver ‘echo-trainings’ to women candidates, equipping them with a range of necessary skills for commune leadership. Each session will prepare women candidates for effective commune management, community organizing, and political campaigning. Through ongoing coaching and mentoring, SILAKA staff ensures that each trained woman candidate can apply these skills effectively in the months leading up to the election and essentially, once elected to public office.