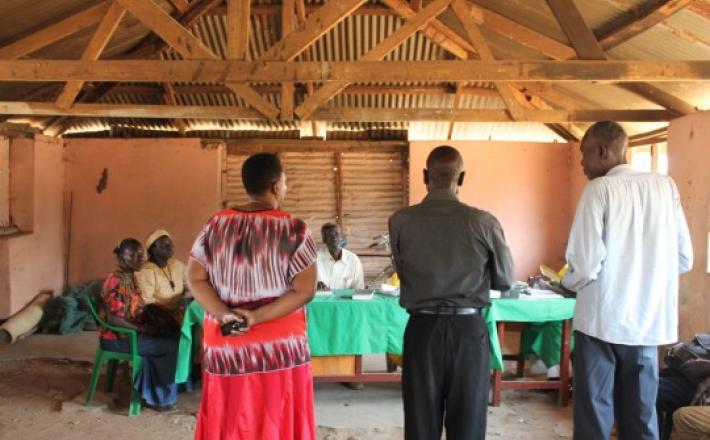 This article was originally published here on 26 February 2016 by Alliance for Peacebuilding.

Elected as traditional leaders, Cizarina Ayuru and Susan Kaino preside over civil cases in traditional court in South Sudan; they are two of the three women serving in the district.

“The community felt confident that we would represent them fairly,” explains Cizarina, a widow and mother of three children. “I was the first female traditional leader in Nyang to preside over cases in a traditional court, and I want to be a role model for women and girls in the community,” she says.

As part of UNDP’s Access to Justice and Rule of Law program, Cizarina became a member of the Rule of Law Forum that encourages dialogue between the government and communities.

“At first, some of the women didn’t know their rights, but now it’s making a difference to the way they think,” says Cizarina.

Since the training, 71-year–old Enrico Jacob says his way of thinking has changed. “In some cases, widows are traditionally forced to marry their husband’s brother. I now believe it is the choice of the woman to marry or not.”

On women presiding in traditional courts, Enrico says, “They bring a female perspective to cases which was absent before…They are vital to ensuring the courts represent all members of the community.”

Acknowledged by the government, gender disparities in access to public services are severe. Female representation is now promoted at all levels of government.

Despite having the potential to become traditional leaders, many women are reluctant because the position is unpaid, they have young children or non-supportive husbands. However, because of UNDP training workshops and resolutions passed at the Rule of Law Forum, female traditional leaders in traditional courts has quadrupled in Eastern Equatoria State.