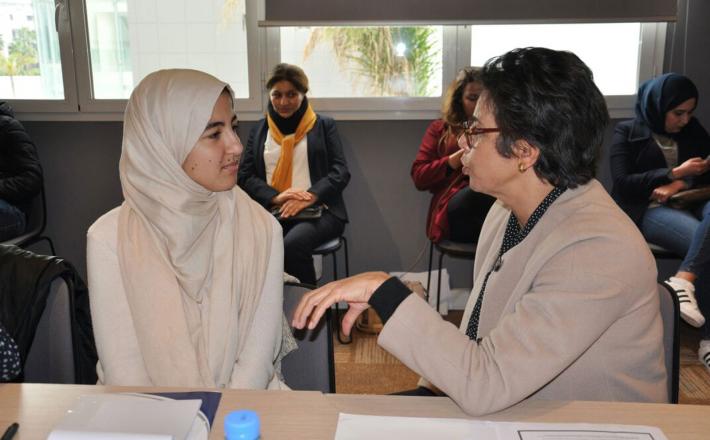 It’s 8:30 AM and Fatiha* is walking into the Moroccan Parliament. In a few minutes, she’s scheduled to sit down with her member of parliament (MP) for their weekly one-on-one meeting. Fatiha plans to propose a new strategy to increase the MP’s social media visibility. By 9 AM, Fatiha is at her desk putting the final touches on a Facebook update to publicize the MP’s visit to a local market, which falls in line with her proposed new social media strategy. “I have enormously appreciated the exchanges with [my MP]. They have been truly rich in discussion, learning and information,” said Fatiha.

Half an hour later, Fatiha is on her feet again, this time to join a parliamentary commission meeting where she’ll take notes that will be used to develop a summary report on the discussion. As soon as the meeting concludes, Fatiha heads back to her desk, this time to work on a project to review and propose changes to a draft bill to modify the code of commerce.

This sample itinerary shows that a fellowship at the Moroccan Parliament isn’t for the faint of heart. Beyond the dizzying array of duties, the nature of working with elected officials creates an additional layer of responsibility and obligation to citizens and constituents, imbuing assignments with greater significance and impact. But for participants in NDI’s parliamentary fellowship initiative, the benefits far outweigh the pressure. Through their work in the parliament, these young Moroccans have gained insight and understanding into the internal workings of Moroccan politics and have built connections and networks within the political system, preparing them to substantively participate in civic and political processes in Morocco and to serve as models for their peers.

Although youth compose roughly 30 percent of the Moroccan population, young Moroccans are largely disengaged from the country’s formal political institutions. Only 20 percent of Moroccans under 35 years old voted in the much-heralded 2011 parliamentary elections and even fewer are estimated to have voted in the subsequent 2016 elections. Under one percent of Moroccan youth are active in political parties and those who lament that they face significant barriers to meaningful participation.

Click here to read the full article published by NDI on 3 July 2018.