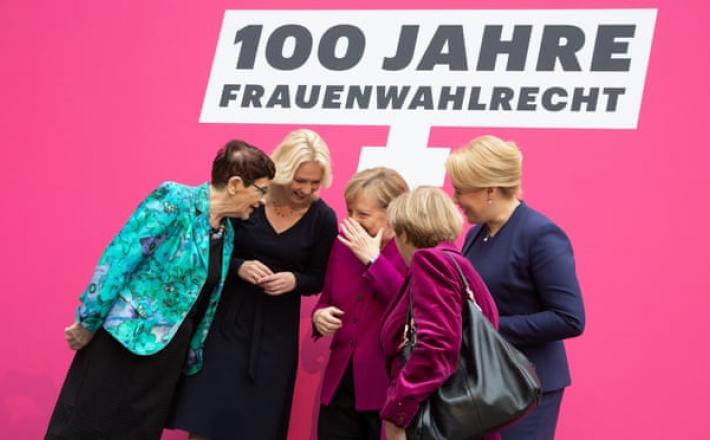 The German chancellor, Angela Merkel, has said that her role as the most powerful woman in Germany should not let society off the hook for the small proportion of women in politics.

As Germany marked the 100th anniversary of women’s suffrage, Merkel said in a speech in Berlin that there was a lot still to do to achieve gender equality, notably in the worlds of politics, business, science and culture.

“The goal needs to be equality, equality everywhere,” she said.

Much had been achieved over past decades on the road to gender equality, Merkel told an audience of mostly female ministers, lawmakers, mayors and others. But “a swallow does not a summer make”, she added. “The fact that I exist should not be an excuse.”

Merkel, the country’s first female chancellor, highlighted the fact that only 30.9% of politicians in the current Bundestag were female, down from 36.5% in the previous one.

Women are also few and far between in the highest echelons of the country’s businesses. While 90% of the biggest listed companies in the US have two women on their boards, in Germany only 17% meet this criteria.

Click here to read the full article published by The Guardian on 12 November 2018.