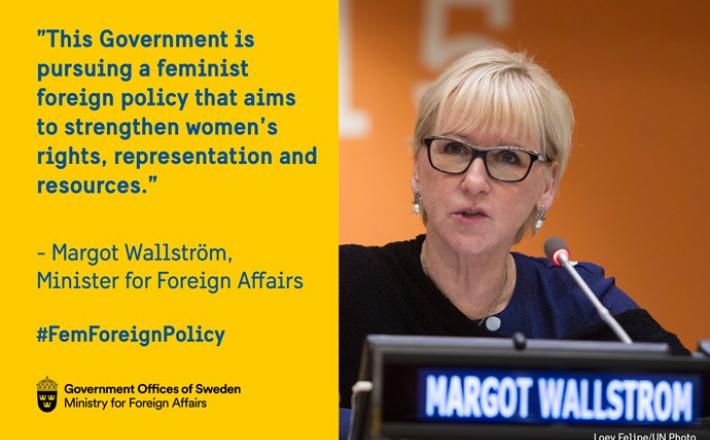 The Ministry for Foreign Affairs of Sweden has launched its ‘Swedish Foreign Service action plan for feminist foreign policy 2015-2018 including focus areas for 2016’. This plan departs from the idea that gender equality is an end in itself, but also something necessary to achieve the rest of the commitments assumed by the Swedish Government, including peace, security and sustainable development. The plan pretends to strengthen Swedish feminist foreign policy, in a context defined by the fact that thirty years after the World Conference on Women in Beijing, there are still many objectives to be fulfilled on gender equality and on the human rights of women and girls. In this sense, the foreign policy agenda is key for the implementation of a systematic gender mainstreaming strategy, constantly linking with peace and security measures. Thus, the action plan is based on six objectives:

The action plan is based on a strategy that involves five sets of actors, including (1) the national context, (2) the EU and the Nordic countries, (3) the global scenario –African Union, Association of South-East Asian Nations, Organization of American States, and the Arab League–, (4) the international community –United Nations, Organization for Economic Cooperation and Development, International Committee of the Red Cross, International Criminal Court, and the International Dialogue on Peacebuilding and Statebuilding– and, finally, (5) bilateral actors at the local, regional, and national levels.

More information can be accessed here. The full document of the Action Plan can be found here.