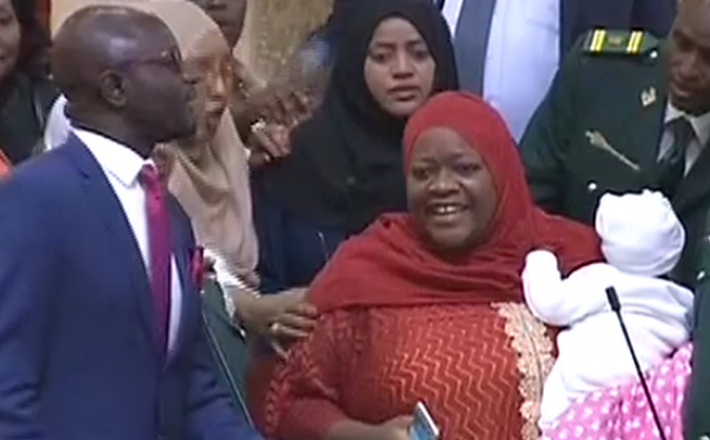 Female MPs have walked out of Kenya's parliament in solidarity with a colleague who was ordered to leave because she had taken her baby.

Zuleika Hassan said she had brought her five-month-old baby with her to work because of a domestic emergency and that parliament didn't have a creche.

According to the house rules, "strangers" are not allowed into the chamber, children included.

Some of her male colleagues described her actions as shameful.

Speaker Christopher Omulele ordered Ms Hassan out of the chamber and said that she could return without the baby.

Some MPs shouted and others started shoving each other.

Ms Hassan called on parliament to create a more "family-friendly atmosphere" if it wanted more women to become MPs.

"I have tried really hard not to come with the baby, but today I had an emergency; what was I supposed to do? If parliament had a nursery or a creche, I would be able to put my baby there," she said.

Deputy speaker Moses Cheboi said in a statement that there is a facility in parliament for mothers to nurse their babies.

However mothers have to "bring along their nannies to watch over the babies at the facility while they undertake their official duties".

Click here to read the full article published by BBC on 7 August 2019.