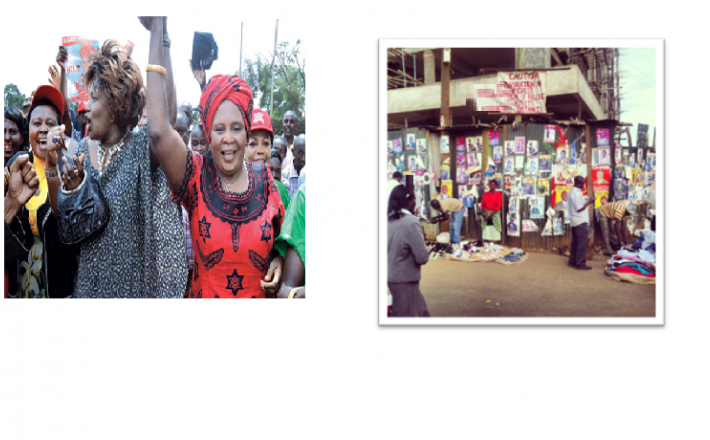 Kenyans head to the polls on Monday and the country is covered in campaign posters vying for their attention. Nairobi’s malls, stalls, trees and speed bumps have been plastered with candidates’ faces. Vast billboards tower over the country’s newly registered electorate promising peace, jobs, progress and change. Noticeably missing from this giant patchwork of posters are the faces of women.

“A record number of women are vying for election this year” boasts one advert on TV. Another advertising feature in the newspaper congratulates the record number of female candidates who got through the party nominations, “Already half the battle has been fought”.

Beneath the spin, the numbers and public perception paint a different picture.

“A record number of women are running because 47 seats were set aside for them, this doesn’t mean they will make up a greater proportion in the national or county assemblies, or have more influence in politics”, a civil rights activist tells me.

Kenya’s new constitution, pushed through in 2010, promised women at least one third of seats in elected bodies. Forty seven women’s representative seats were created to reserve legislative positions for women in the national assembly. In theory, this election should have opened the floodgates for women wishing to enter politics. In practice, little has changed. The high court has yet to push through legislation on the two thirds principle, and some have argued that the women’s representative seats are having the reverse effect.

“There are no ladies running for Governor in this county!” remarked TV host Larry Madowo after 6 male candidates introduced themselves for the Nairobi Governor position on a live TV debate, “… Maybe we can change that in the future”, he added optimistically.

A week later, the first women’s representative debate was held on television to give women a platform to discuss the issues and priorities that they thought were crucial for Kenya’s capital. The reaction from some of the audience, and voters on social media was one of confusion over the purpose of the position.

The rate of increase in the number of women in parliament has been faster in sub-Saharan Africa in the last 40 years than any other region in the world, primarily through the use of quotas and other affirmative action policies. But whether women’s influence and social change has followed is still debated. Affirmative action advocates say that getting numbers of women up in Parliament is the crucial first step to prove they can lead, before a mindset can shift at local level.

“Government has promised a lot, especially on issues of reproductive health and domestic violence which have not been delivered because we don’t have enough women in parliament pushing through these bills”, said Rachel Shebesh in the debate

“I am 100% sure if we take the 47 women who will be coming from the counties and the others elected, we will have the number to be able to deliver what we have been promised for so long”.

In 1997, Charity Ngilu stood for president and got over 7% of the vote. This year, Martha Karua is clinging on to less than 1% according to opinion polls.

“Women make up more than 51% of Kenya’s population, if they wanted to elect a female president they could, but they chose men; if you want to empower women focus on educating them. Quotas lead to misunderstanding and a skewed system” a leading businessman abruptly tells me.

The public perception in Kenya of women in politics today is still apprehensive. Women’s political participation has been steadily increasing over the last few years, but it remains to be seen whether more numbers in office means more influence and impact in governance.