Commemorating the 40th Anniversary of CEDAW

Commemorating the 40th Anniversary of CEDAW 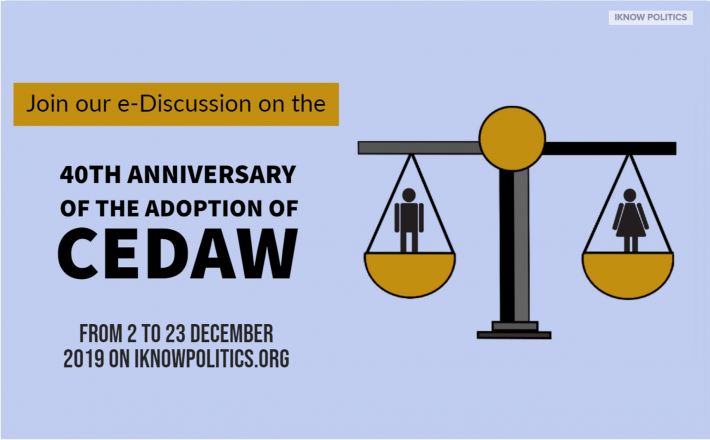 The Convention on the Elimination of all Forms of Discrimination against Women (CEDAW) is the most important treaty on women’s human rights. Adopted in December 1979 and ratified by 189 States, it is a leading tool in eliminating all forms of discrimination against women and advancing women’s empowerment and gender equality, both in the law and in practice. The implementation of CEDAW is critical to the achievement of all the Sustainable Development Goals (SDGs), particularly Goal 5 on gender equality and Goal 16 on peace, justice and inclusive institutions.

State parties to CEDAW are legally obliged to eliminate all forms of discrimination against women, including in politics, to guarantee women can exercise their human rights in the same way as men, and to regularly report to the CEDAW Committee on their progress towards achieving these goals.

No country in the world has fully achieved gender equality, and none “are fully transforming laws, policies, or public budget decisions on the scale needed to reach gender equality by 2030.”[1] Discriminatory laws are still widespread, affecting more than 2.5 billion women and girls across the world. It is estimated that women enjoy only 75% of the legal rights of men.[2]

When laws guaranteeing equality are adopted, their implementation is often hampered by persisting gender stereotypes, discriminatory social norms and the economic exclusion of women. CEDAW mandates that States guarantee substantive equality between men and women – not only equality in the law or equality of opportunities, but also equality of outcomes, bearing in mind the diverse experiences and backgrounds of women.

Although progress has been achieved in the past few decades, legislative and public decision-making processes continue to be largely dominated by men. The latest data reveals that women make up only 24.3% of all world parliamentarians and 20.7% of all government ministers. While this represents an all-time high for women in politics, it shows women’s voices are still vastly absent from political decision-making.

Most recently, the CEDAW Committee has taken a strong stance on women’s political participation through a joint statement with the Inter-Parliamentary Union, titled “Women’s political leadership:  Striving for balance: 50/50 by 2030”.[3] Moving away from the idea that minimal targets should be set, the Committee affirmed that gender parity in decision-making should be the norm, as a prerequisite for democracy, sustainable development and lasting peace.

The CEDAW Committee has a unique approach to the role of parliaments in bringing about equality between men and women through laws, policies and budgets, and calls them to be involved throughout the CEDAW review process – namely the drafting of state reports, the dialogue with the Committee based on the report, and the implementation of the Committee’s ensuing recommendations.[4]

The 40th anniversary of CEDAW’s adoption is a unique opportunity to draw attention to the role the Convention has played in repealing and amending laws that discriminate against women and in advancing gender equality, as well as identify solutions to accelerate positive change for women and girls everywhere. iKNOW Politics and its partners are convening this e-Discussion to facilitate an online exchange of knowledge and experiences based on the guiding questions below. Civil society representatives, women and men in local and national politics, experts, practitioners, and researchers are invited to contribute from 2 to 23 December 2019. The submissions will contribute to the elaboration of a Consolidated Reply that will be published here.

[2] Remarks by Phumzile Mlambo-Ngcuka, Executive Director of UN Women, at the G7 ministerial meeting on gender equality and women’s empowerment in Paris, France, 10 May 2019: unwomen.org/en/news/stories/2019/5/speech-ed-phumzile-g7-ministerial-meeting (accessed on 27 September 2019)

[3] Joint statement issued on the occasion of International Women’s Day and the 40th anniversary of the Convention on the Elimination of All Forms of Discrimination against Women, Geneva, Switzerland, 8 March 2019: https://ohchr.org/EN/NewsEvents/Pages/DisplayNews.aspx?NewsID=24279&LangID=E (accessed on 8 October 2019).

[4] Statement on the relationship of the Committee on the Elimination of Discrimination against Women with parliamentarians, adopted by the CEDAW Committee at its 45th session (January—February 2010): https://ohchr.org/documents/HRBodies/CEDAW/Statements/Parliamentarians.pdf (accessed on 8 October 2019).

There is 1 Comment in this language version, More comments are available in different languages.

Can you note that not one United Kingdom government since CEDAW was promulgated 40 years ago has ever nominated anyone for election to a CEDAW committee – not once.  This is despite very resourceful lobbying by UK activists like Lesley Abdela, Annette Lawson, et al.  Originally the excuse was the Government of the day had ‘other priorities’ on the international level.  The reasons for this abject failure of a powerful nation-state refusing year after year to nominate anyone from the UK has probably been due to two principal reasons: first, that no government really saw any value in CEDAW despite knowing it has been called a United Nations for Women, but most likely the reason has been because once elected, that person represents the world of women as a whole rather than her home country, i.e. why bother if the country doesn’t get the kudos.  Those of us who have lobbied the British Governments over the decades have just heard from an inside source that the recent Conservative Government had no intention of putting a name forward before March 2020 for next year’s elections either.

Does anyone connected to CEDAW have any advice on how to pressure, even shame, the British Government into taking CEDAW seriously and putting a candidate forward for election in 2020?