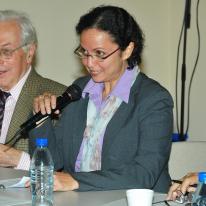 Noha El-Mikawy is a Governance and Poverty Advisor at the Oslo Governance Centre. She has contributed to UNDP programme and project formulation in the areas of parliamentary strengthening, anti-corruption and public sector reform, judicial reform and gender empowerment in Arab middle income countries, Arab countries in (post) conflict, as well as oil-rich states. Ms. El-Mikawy has taught politics of the Middle East at the American University in Cairo and at the Free University of Berlin and Erlangen University in Germany. She coordinated comparative research on the political economy of reform at the Centre for Development Research at the University of Bonn. She published on the political economy of reform in Egypt, Morocco and Jordan, e.g. Building Consensus in Egypt's Transition Process (1999) and Institutional Reform and Economic Development (2002). She holds a Ph.D. from the University of California in Los Angeles.