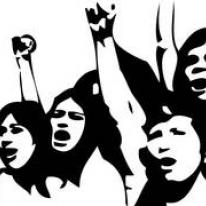 By Ashwath Komath, It is a very common stereotype in the world, especially in politics, that women cannot be strong and cannot handle ministries of defence or foreign affairs because at times they involve the element of violence in them. It is the same attitude that says that they can't join the armed forces.

This is not true at all. Women are very much capable of making strong decisions, even if it involves violence. It is just that women are a little more cautious about using violence as a first resort. It is not out of hesitation or being squeamish, it is because a woman in a position of power is more calculative about such decisions than men who tend to be a more rash with such decisions.

History is filled with several examples of women who waged wars for their homelands. In modern history, we have people like Golda Meir, Indira Gandhi and Margaret Thatcher who show very clearly that being a woman has absolutely nothing to do with going to war or making tough decisions.

Golda Meir was Prime Minister of the State of Israel from 1969-1974. During her tenure as Prime Minister, two very powerful military events stand out. First, the response to the Munich Massacre in 1972 when 11 Israeli athletes were murdered at the Munich Olympics. Meir authorized the Mossad to conduct 'Operation Wrath of God' to avenge the murder of these athletes. The second event is the Yom Kippur War. While Israel was taken by surprise at the beginning due to faulty intelligence, Israel recovered and pushed back the Arab armies and secured their positions.

She resigned the next year by her own will even though an Israeli commission studying the failures of the war cleared her of any direct responsibility. She can't be faulted here for not going to war earlier, simply because her advisors had suggested to her not to. If it was a man as Prime Minister, this wouldn't have been a concern, but since she was a woman, such questions did come up.

Indira Gandhi was the Prime Minister of India from 1966-1977 and 1980-84. She was the daughter of India's first Prime Minister, Jawaharlal Nehru. Gandhi was known to be a very strong personality even within her own party and government. She took some very hard political decisions which required a lot of political will to do so, for example, the nationalization of banks in 1969. She had no qualms about upsetting sections of the society for larger objectives, which is often hard to do when you're democratically elected (Indira Gandhi, however, has been criticized to have dictatorial tendencies and the emergency period of 1975-77 is a huge controversy).

She went to war with Pakistan in 1971. This war is perhaps one of India's biggest military victories because the war resulted in the dismembering of Pakistan and the creation of Bangladesh and the capture of 93,000 Pakistani POWs. A year before she went to war, she boldly mobilized international support and highlighted the problems which were happening in erstwhile East Pakistan where Bengalis were being killed ruthlessly by West Pakistani troops. She had absolutely no qualms about going to war if it was needed.

And then finally we have Margaret Thatcher, the 'Iron Lady' of the United Kingdom. Thatcher was no push-over. She made some very tough political decisions to try and revive the failing British economy. But what she is most known for is her leadership during the 1982 Falklands War against Argentina. UK managed to push the Argentinians away from the Falklands and that won her a lot of popularity.

A very famous anecdote involves Margaret Thatcher telling George H.W Bush that 'This was no time to go wobbly' during the first Gulf War in 1990.

Clearly, it is only a stereotype that women can't make hard decisions like going to war. Keeping a stereotype that a woman is not capable of having a powerful post because she is a woman has no grounding in history because these examples destroy that very notion.

Apart from heads of state, let us not forget that there are several women out there working in their ministries and departments of Defence. Women are very much capable of doing what is needed for their countries, and if necessary, even wage war.