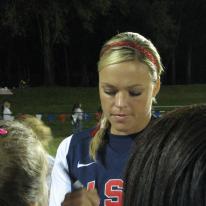 It wasn’t my proudest parenting moment: I stood on the ice surface in the community arena shaking with anger as bewildered hockey players, parents, and coaches looked on.  I had just confronted the six-year boy who had, for the third time, crosschecked my daughter in a novice hockey game.  (My mother bear instincts had overpowered me and I had marched onto the ice during play.)  The boy’s parents also rushed onto the ice surface in his defense.  Their rationale: “He was frustrated that a little girl – my little girl – was out-skating him.  My predominant thought was that six-year old boys don’t know it’s shameful to be out-played by a “little girl” unless they’ve been taught that it’s shameful.  My daughter swiftly ploughs through everything in life: she’s a quick thinker, talker, skier, and yes, skater.  Why should this boy feel any shame being outplayed by my little sniper?

In the shadow of this hockey showdown, my family wasn’t surprised that my loudest cheer during Super Bowl 2015 was for the menstrual pad commercial spawning #LikeAGirl.  The hashtag is meant to empower girls to run, fight, and throw “like a girl”, thereby transforming the derogatory nature behind the once cringe-worthy term into a formidable phrase.  A quick “like A girl” online search online today (post 2015 Super Bowl) will yield vastly different results than it did a month, a year, and most certainly, a decade ago.

Curiously, within hours of the commercial, vocal backlash was seen on social media and the new #LikeABoy cropped up.  Self-proclaimed “meninists” were fighting back.  Why the uproar in building up young girls’ confidence?  Surely a one-minute commercial focusing on a female issue – in a four-hour predominantly male event – isn’t expecting too much?  My mother-bear instincts became riled once again.  Though I do not accept the pay gap and political misrepresentation that women in my generation endure, I become thoroughly appalled that this trend could continue in my two daughters’ lifetimes.  Truly, is expecting respect, fair wages, and political representation too much?

Even in a progressive nation like the United States, evidence of the need for fostering girls’ self-esteem is all around us.  In nearly every occupation, from elementary school teachers to computer programmers, women earn just 78 percent of a man’s pay in the same position (AAUW, 2015).  Further, women hold less than 20 percent of congressional seats despite being half of the population (Representation 2020, 2013).  The United States ranks a measly 98th in the world for percentage of women in its national legislature (Representation 2020, 2013).

Proportional representation is not a fantasy.  Sweden, Finland, Denmark, Germany, and the Netherlands have all had success implementing strategies to ensure proportional representation.  Some nations go further, requiring “positive quotas” where half of political candidates must be female (Hill, 2014).  Prioritizing recruitment of female candidates is obviously a key strategy.   Offering sensible childcare policies to ensure that women can balance family and civil service is another important stratagem.

Encouragingly, the upcoming presidential elections in 2016 may feature some familiar female faces including Hillary Clinton, Elizabeth Warren, and Susana Martinez.  It’s even possible that some of these candidates will garner votes “because they’re women.”  Certainly, the goal is not to eradicate one form of sexism only to replace it with another.  Nevertheless, research has shown that when women are empowered as political leaders, countries often experience higher standards of living with positive developments in education, physical safety, poverty alleviation, reproductive rights, childcare, equal pay, and service of minority groups (Markham, 2013).  In other words, women help deliver democracy.

It is, no doubt, faulty logic to assume that #LikeAGirl will solve the gender pay gap and political misrepresentation.  I, however, have a difficult time understanding the backlash behind the hashtag.  Why not embrace any sliver of society or slice of social media that may help even one girl find her voice?  After all, that voice could someday shape her nation, or at the very least, silence a bully at a community arena.