Fashion or Politics: Women in the Media, Pakistan 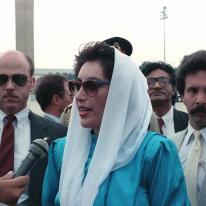 By Halima Tahirkheli, Electronic media has become more influential in Pakistan in the last decade due to the rapid development of communication technology. The media play a vital role in Pakistan by providing information and awareness about national and international issues among their audiences. The media also plays a significant role in shaping the society’s economic, cultural, and political priorities.

Since the media in Pakistan are emerging and more radio and television channels are being launched, more women journalists are now appearing as anchors and talk show host on several television channels.  Although these women are considered to be an example of professional working women, many female journalists still face many obstacles and challenges. Only three percent of journalists in Pakistan are women (Shah, 2013), and these women are encouraged to focus on issues related to fashion, homemaking, and entertainment. Pakistani women are not often assigned to report on the environment, wars, disease outbreaks, current affairs, and political issues.

Pakistani females make about fifty percent of the country’s population. The male-dominated society has kept the majority of the fifty percent of the Pakistani population out of the field of politics and social development. In a deeply conservative country, cultural taboos restrict women from reporting on some issues that are meant for their male counterparts. Some of the female journalists feel they cannot be taken seriously simply because they are women.

Politics is still considered a male dominated domain. Political shows mostly cover the progress of male politicians or their agenda on certain issues, such as  fighting terrorism or their relationship with western countries. However, the media seems to underrepresent women politicians in Pakistan. The media often portrays women politicians as fashion icons and rarely reports on their political agendas.

Many Pakistani women are illiterate and not able to read or research articles to gain awareness about the political development of the country. According to the United Nations Statistic Division, forty percent of women in Pakistan are literate (Omar, 2012). And in Khyber Pakhtunkhwa and  Baluchistan, female literacy rate is about three percent to eight percent (Latif, 2010). For many rural and illiterate women in Pakistan, their only way to gain knowledge about political issues is through the television when they go and clean their male family members’ room. The men usually keep the television sets in their rooms. However, both literate and illiterate women may still have limited knowledge about the political issues of women’s rights due to lack of coverage of women’s issues in these political shows.

If more women journalists cover stories related to politics, it may enhance media coverage of the political activities of women politicians or their success stories in politics. Serious gender-based topics, such as honour killings, domestic violence, and girls’ education can start to appear on these political shows as well. This is return can cause many Pakistani girls and women can be encouraged to take an interest in political issues and women’s rights by watching these women journalists on television or radio addressing significant issues that affect many Pakistani women in the country regardless of their education level, socioeconomic status, and family background.

The Uks Research Center on Women and Media has carried out research to explore  how women were not given proper coverage in the Pakistani media.  The organization wanted to also look at how women were portrayed in the media. According to  Uks Research Center for Women and Media (2010), out of a   total of 1,983 news items on the radio, 280 were broadcasted on women’s issues. And when women’s issues were covered in the radio, the topic focused on  fashion, cooking, beauty tips, and events. The news did not in general focus on issues related to women in war torn region or violence against women.

Table 2 shows the breakdown of the radio news.

Table 2: Breakdown of the broadcast on women’s issues of news items on radio stations

Table 3: Breakdown on the broadcast on women issues of  news items on television stations

The tables above show that radio and television news have limited coverage on women’s issues.

The media have an increase influence over their audiences through which it is able to develop the ideas, values, behaviour, and concepts of the general public. When more women journalists talk about political issues in their programs, this gives the audiences that women’s roles are not only limited to the household and fashion issues, and they can contribute to other sectors in society, such as politics, current affairs, and human rights.