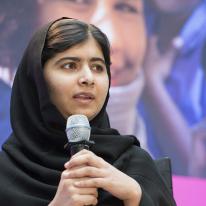 One mode of political participation that is popular among young women is through social media. Connectivity offered by the internet allows for international social cohesion over women’s issues. The younger generations receive most of their information from social media which also creates a greater sense of unity. Likewise, social media allows political issues and activism to spread rapidly while offering little participatory transaction costs. Additionally, the internet allows women who want to participate in political issues to do so by helping them overcome societal or physical constraints.

One pertinent example of a politically active girl that captivated much of social media’s attention this summer is Farah Baker. Using her Twitter, Baker reported a real-time firsthand account of the Gaza conflict through the eyes of a teenage girl living in a war zone. She offered, and continues to do so today, a personal look into living in Gaza that people strongly empathized with due to her candor and relatability. There was also a level of trust produced with her readers that perhaps stemmed from her communication through Twitter. Social media has become a useful resource for political participation because information is passed from one source to another and appeals to a younger generation of women who might feel distrustful of traditional media outlets.

Another form of political participation that allows young women’s issues to get the attention they deserve is social activism. Social activists, like Malala Yousafzai, are able to bring to light social issues that primarily affect girls and are often overlooked by older male members of government. Yousafzai’s social activism, for example, put a face to the injustices perpetuated by the Taliban and other extremist groups against women. Yousefzai is a social activist with one of the largest followings for a young woman and gives clout to the arguments of those who advocate for the expansion and the preservation of women’s rights, especially girl’s access to education. Most importantly, social activists often are the ones to bring new issues to the forefront of the world’s attention in order to prompt organization amongst the unorganized and change the status quo.

An alternative way young women can be politically empowered and advocate for issues important to them is through engaging in the formal political process and institutions. Where government is usually dominated by older men, the presence of young women in politics encourages other young women and voters to better engage within the political system and lessen their disenfranchisement. Their presence in politics may also curtail disillusionment with government institutions that much of the demographic shares. Women like Tulsi Gabbard, the youngest congresswoman ever elected in the United States, focus on concerns like females in the military, abortion, contraception and offer a perspective similar to other young females. Overall, issues important to young women receive a greater voice within government when those making policy changes are young women themselves.

To conclude, young women are undoubtedly important to politics. They should participate in politics through different channels. Their voice, interests, and concerns must gain the attention of political institutions worldwide, as this is the first step toward universal gender equality.