Rebuilding the Gates for Women in Politics 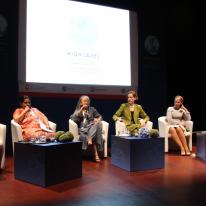 It is reasonable to assume that the best political system for a woman to get into politics is democracy. Of course, this is arguable given that most democracies, including Western democracies have not been able to provide women with an equitable political representation and that we usually consider western democracy to be the most advanced of all democracies.

Most democracies have the political party as the basis of competition in their politics. Parties differ in ideology, they set plans, release manifestos and promises, mobilize political opinion in support or opposition to any idea and most importantly, decide its candidates that would contest elections.

This forms the gateway to politics and becomes an extremely important topic as far as entry of women are concerned. Party endorsement for women in politics is therefore a pre-requisite for the entry of more women into politics. Sure, in most democracies, an alternative of running as independent also exist. But political realities dictate two things. One, running as independent is not as effective as having a party endorsement, which already has a big base and loyal supporters and followers. Two, if the candidate wins as an independent, the candidate is poached by big parties, especially if there is no clear majority and the government that is going to be formed is that of a coalition.

So parties therefore have a bigger role than even the government does when it comes to representation. After all, members of the government come from political parties.

Recent trends indicate that the world is slowly adopting the need to incorporate more women into politics and create a more gender-equitable world. Even if in reality, these trends may not be converted to actual gains on the ground, we see that at least in rhetoric, there is an increased support for the idea of gender-equality in politics. This shows that even political parties would want to show that they are more open to having more women. This is what needs to be pressed the most.

At the face of it, it may seem obvious. After all, which woman who gains entry into politics would discourage others from getting in or for that matter, not endorse policies which are more favourable to women? This is not necessarily true. Examples from around the world will show that there are women politicians who don't endorse feminism or rights on women and lend their support for the prevention of women rights due to their ideologies, which are more often than not, conservative in nature.

In this case, it is necessary for existing politicians, both male and female, to use the lack of representation of women and the lack of internal democracy as a means to attack their opposition. The idea is to create a negative image of political parties for being exclusive of women which will create a way for internal reforms to be more inclusive.

Such issues are debated, but it is not something that is pressed a lot by parties. After all, politicians consider other issues much more important than internal party democracy such as the economy or foreign policy. Besides, most parties have this problem and therefore are hesitant to take it up fearing that it would show hypocrisy on their part. So, then it becomes important for this demand to be placed by the supporters of parties to call on for more democracy.

Now getting supporters to bring on larger representation of women in politics won't happen if one pitches only the idea of women representation. Instead, this needs to be wrapped in the larger effort of party reforms and internal democracy. Supporters simply won't accept the idea of increase in women's representation by itself, just like they don't vote for a woman just because she is a woman.

Besides, supporting larger reforms would only benefit the women because it creates a more supportive environment for women to compete and this is the larger goal in enlarging women's role in politics.